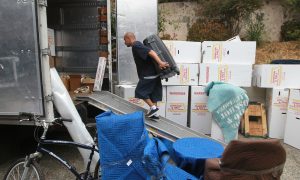 8-Year-Old Boy Dies, Second Child and Woman Hurt After Being Hit by Van in California

An 8-year-old boy died and a child and woman were injured when a van hit the three as they were going to school in Southern California on Sept. 30.

The 8-year-old boy, who was not named, eventually died from injuries sustained in the crash.

A 9-year-old girl and her mother were also hit, but they are expected to survive, KTLA reported. According to the VC Star, the 9-year-old was conscious and speaking to paramedics.

The driver of the vehicle was identified as a 17-year-old female. Police said that it was not a hit-and-run case, and she stayed at the scene of the crash.

Police said she was dropping off her sister’s children at Ramona Elementary School when the crash occurred, according to KTLA.

A teacher and other people ran to provide aid when the crash took place. An officer arrived on the scene and began performing CPR on the child, according to the Star.

The also reported that a crossing guard was not on duty when the incident took place.

Police told KEYT that they do not believe drugs or alcohol were factors in the collision.

Other circumstances of the crash were not immediately known.