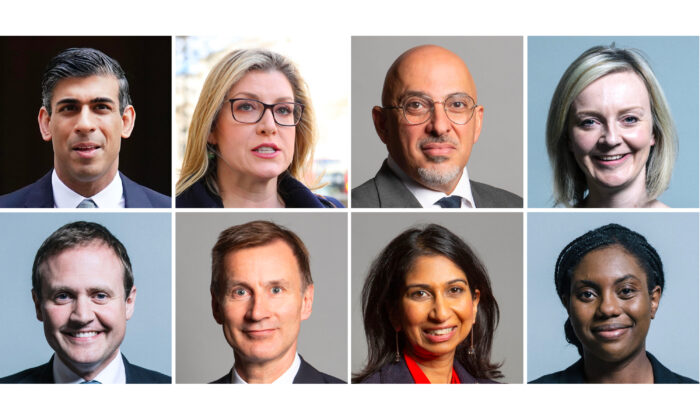 The UK’s Conservative MPs will vote on Wednesday to narrow the field among eight candidates who secured nominations to become the UK’s next prime minister.

Three out of 11 leadership hopefuls have dropped out of the race after apparently failing to secure 20 signatures to pass the nomination threshold.

Former Chancellor Rishi Sunak, who, along with former Health Secretary Sajid Javid, started an avalanche of government resignations that brought down Prime Minister Boris Johnson, had the most support during the nomination process, at 43 signatures, and is the bookmakers’ favourite.

But rivals criticised Sunak over raised taxes following the COVID-19 pandemic, saying his policy would drive the country into recession.

Trade minister Penny Mordaunt came second in terms of parliamentary support, at 24 signatures. She’s also the most popular among Conservative grassroots, with former equalities minister Kemi Badenoch being a close second, according to a recent poll.

Mordaunt pledged a 50 percent cut in VAT on fuel. But she insists she will maintain control of the public finances.

Foreign Secretary Liz Truss had 21 MPs’ backing, promising to reverse the national insurance hike that was introduced in April and to “keep corporation tax competitive,” as well as maintaining a tough stance against Russia.

Tugendhat has not held any ministerial post, but the former soldier argued his experience “in some of the most difficult and trying conditions around the world” will prove more useful.

Badenoch, one of the most popular among the grassroots, said she would reduce the size of the government. She also promised to remove the UK’s net zero emission target, calling it “unilateral economic disarmament.” Badenoch said she is committed to reducing corporate and personal taxes but told rivals, “I will not enter into a tax bidding war over ‘my tax cuts are bigger than yours.’”

Zahawi promised to cut the basic rate income tax by 1 percent in 2023 and another 1 percent in 2024. He also said he would remove VAT and green levies on fuel for two years to help cut bills.

Hunt promised to slash corporation tax to 15 percent and remove business rates for five years in the poorest communities. But he would keep the national insurance rise and any cut in income tax could only come if it was sustainable, with a growing economy, he said.

Braverman listed her priorities including tax cuts, border control, combating “woke rubbish,” and solving the residual issues of Brexit. She said she would cut VAT on energy and fuel bills and cut corporation tax to attract and incentivise investment.

The candidates will need to secure 30 votes to enter the next round, with second votes to be held tomorrow. Further votes will be cast if necessary to select the final two contenders by July 21.