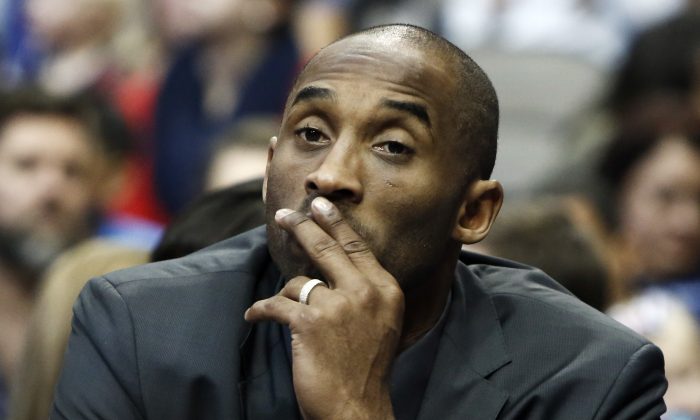 Los Angeles Lakers guard Kobe Bryant looks on from the bench in the first half of an NBA basketball game against the Dallas Mavericks, Friday, Dec. 26, 2014, in Dallas, Texas. Bryant was sitting out his third straight game to rest his sore body but could be back in the lineup when the Lakers return home for their next outing. (AP Photo/Brandon Wade)
Sports

They are plenty of inspiring quotes from sports legends in history. But what are some inspiring things present day athletes have to say?

This quote is much deeper if you understand it’s significance in the story of Durant’s childhood.

The quote was actually given to KD by his grandmother when he was 10 years old. He was then made to write it 200 times on a piece of notebook paper.

Since then, he truly followed through on that quote by displaying an incredible work ethic throughout his entire childhood. This work ethic of his was also highly touted by scouts leading up the 2007 NBA Draft where Durant was drafted #2 overall.

Today, he is still considered to have one of the most insane work ethics in all of sports.

For Kevin Durant’s full story leading up to the draft, click here.

2. “When it comes down to that moment, when it’s me against you, YOU know in your head whether you worked hard enough. You can try to lie to yourself. You can try to tell yourself that you put in the time. But you know — and so do I.”

Because of quotes of these, Watt is quickly becoming one of the most popular and inspiring players in the NFL, despite being a less heralded defensive player.

Currently, Watt is still in contention with the likes of QBs Aaron Rodgers, Tony Romo, and Tom Brady for the NFL’s Most Valuable Player reward. If he wins, he’ll be the second defensive player in history to ever do so.

3. “I have self-doubt. I have insecurity. I have fear of failure. I have nights when I show up at the arena and I’m like, ‘My back hurts, my feet hurt, my knees hurt. I don’t have it. I just want to chill.’ We all have self-doubt. You don’t deny it, but you also don’t capitulate to it. You embrace it.”

Kobe is really the modern day MJ. Like His Airness, Kobe is an extremely hard worker.

There are plenty of stories of people being blown away by just how crazily-hard he trains. Likewise, he has many inspiring words of wisdom to show for it. Below is another one.

4. “Everyting negative – pressure, challenges – is all an opportunity for me to rise.”

5. “Money is not a motivating factor. Money doesn’t thrill me or make me play better because there are benefits to being wealthy. I’m just happy with a ball at my feet. My motivation comes from playing the game I love. If I wasn’t paid to be a professional footballer I would willingly play for nothing.”

One of the things Lionel Messi is most popular for among fans is his childlike love of the game. He plays soccer like a little kid running around on the street. With that kind of pure ethusiasm, he is naturally super good at what he does.

6. “Pressure is something you feel when you don’t know what the hell you’re doing.”

Hence no one engineers a fourth quarter comeback or a game-winning drive like Petyon Manning(arguably).

7. “A lot of times I find that people who are blessed with the most talent don’t ever develop that attitude, and the ones who aren’t blessed in that way are the most competitive and have the biggest heart.”

The story of Tom Brady is in fact one of an athletically deficient football player who was not highly regarded coming to the league. In fact, his athleticism has never gotten much better. But no quarterback shown the penchant for winning like Brady in the past decade.

8. “Success isn’t owned. It’s leased and rent is due every day.”

Here’s another one from Watt. If this doesn’t inspire you to work hard, I don’t know what does. That said, if you want to hear more motivating stuff from Watt, follow him on Twitter because he says a lot of his motivational thoughts on there.