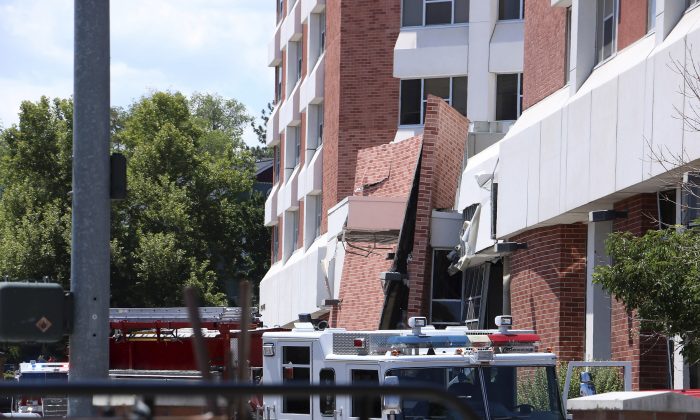 Rescue personnel respond to an explosion that damaged Argenta Hall and Nye Hall on the University of Nevada, Reno campus in Reno, Nev., on July 5, 2019. (Jason Bean/The Reno Gazette-Journal via AP)
US News

8 Injured After Explosion Damages Dorms at University of Nevada

RENO, Nevada—A fire official says eight people were treated for injuries after an explosion and “partial collapse” of a dormitory building at the University of Nevada, Reno.

City spokesman Jon Humbert said there were no reports of any deaths in the Friday afternoon blast at Argenta Hall.

Steve Leighton with the Reno Fire Department said on Friday, July 5, that two people were taken to a hospital and quickly released and six others were treated for injuries at the scene.

He did not have details on whether students were among the injured, but he says at least some students were inside the building at the time and emergency crews were working to get them out.

Firefighters were called after an initial small explosion and were at the building when a larger explosion occurred.

EXPLOSION ROCKS CAMPUS: Police responded to an explosion at a University of Nevada in Reno dorm, with rescue crews now searching for students who may be trapped. @ErielleReshef reports. https://t.co/QDTcWaqUD4 pic.twitter.com/udyZzFGSVo

Leighton says officials don’t know the specific cause of the explosion at Argenta Hall but believe it was some kind of mechanical failure in the basement.

A University of Nevada, Reno student says she thought she was experiencing an earthquake when an explosion rocked the dormitory where she was in her room watching Netflix.

Raven Green told The Associated Press she heard a loud boom Friday and felt the building shake. She says she opened her door and could hardly see in a hallway full of smoke and debris, with water spraying everywhere.

Green says the dorms aren’t completely full this summer, but there were still lots of residents. She didn’t know how many people were in the building at the time of the explosion.

The 19-year-old Green says she climbed over doors and pieces of drywall to reach the stairs but found them broken. She raced back to her room and was evacuated about 40 minutes later.

“The buildings are being checked floor by floor by fire and emergency crews for structural damage and for any remaining occupants,” said spokesman Humbert. “Our main focus is public safety and completing the search of the building. No one is missing.”

Authorities said Friday, police officers and firefighters were on scene and advised people to stay away.

Classes Have Been Canceled

Harrison Wier, an intern with the university’s athletic department, is staying on the second floor of the dorm. He said people had no idea what was going on when they heard the fire alarms.

“We just started walking out of the building, I even saw some staff members walked out with their hands up, we had no idea what was going on at first but five minutes after we were outside there was glass shattered everywhere,” Wier said.

According to Wier, the building houses many student-athletes that are there for the summer, as well as some international students.

Argenta Hall can house up to 750 people.

Nye Hall was also damaged by the blast, officials said.

Officials are also working to determine if the building is structurally sound.