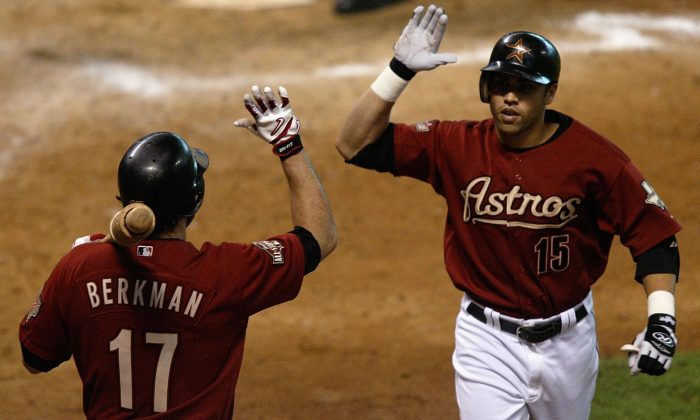 With a pair of home runs Tuesday night, Pirates catcher Russell Martin jump-started what could be one of the great individual postseasons ever. He has a ways to go to achieve official hero status, but Martin is off to a nice start. It begs the question though of what was the greatest postseason performance by an individual player?

Here we’ll rank the eight best performances since the expansion to four divisions in 1969. We’ll be grading on not only statistics but how clutch the performance was. On to the list:

8. Carlos Beltran, Houston Astros, 2004: Having never been to the postseason before 2004 (he played previously for the Royals) Beltran made quite an impression in his first taste of the playoffs. The five-tool centerfielder hit four home runs in a five-game set against Atlanta in the NLDS and then four more against St. Louis in the NLCS while driving in a combined 14 runs. Overall Beltran hit a ridiculous .435/.536/1.022 (average/on-base percentage/slugging) in 12 postseason games that year.

7. Barry Bonds, San Francisco Giants, 2002: Previous to 2002 Bonds had a great regular season resume with a very disappointing postseason history. But in the 2002 postseason Bonds, who won his fifth MVP that year, drew an incredible 27 walks—13 intentional—but still hit 8 home runs and drove in 16 while putting up a .356/.581/.978 batting line over 17 games as the Giants made it to the World Series.

6. Jack Morris, Minnesota Twins, 1991: Morris, a longtime Detroit Tiger played just one season for the Twins, but it was a memorable one. After a solid 18–12 regular season, Morris went 4–0 in five playoff starts with a 2.23 ERA—not bad. Included in those starts though is one of the greatest postseason performances ever—10 shutout innings in Game 7 of the World Series to beat Atlanta 1–0.

5. Reggie Jackson, New York Yankees, 1977: The straw that stirred the drink was at his finest when it mattered in the 1977 World Series against the Dodgers. For the overall postseason Jackson hit .306/.405/.750 but it was his three home runs—hit in consecutive swings—in Game 6 against Los Angeles that sealed the title for the Yankees and put Jackson on par with the all-time greats.

4. Johnny Bench, Cincinnati Reds, 1976: The Cincinnati Reds swept both the NLCS (3–0 against Philadelphia) and World Series (4–0 against New York) in 1976 and the two-time MVP Bench was a big reason why. Bench got a hit in all seven postseason games, while hitting three home runs—including two in the Game 4 clincher against the Yankees. Overall he hit .444/.464/.926 in those seven playoff games.

3. David Ortiz, Boston Red Sox, 2004: Believe it or not, but David Ortiz was not very well-known heading into the 2004 playoffs. But in 68 plate appearances spread over three series, Ortiz hit a blistering .400/.514/.764. “Big Papi” officially became a household name during the ALCS against New York with walkoff hits in Games 4 and 5 while his Red Sox faced elimination.

2. Orel Hershiser, Los Angeles Dodgers, 1988: Hershiser, who won the Cy Young Award in 1988 stayed hot in the postseason going 3–0 in five starts, plus a save in Game 4 of the NLCS, with a 1.05 combined ERA. After seeing his bullpens blow his leads in Games 1 and 3 of the NLCS against the Mets, Hershiser finished his postseason with three straight complete game wins—including two by shutout—as the Dodgers topped Oakland to win the World Series.

1. Curt Schilling, Arizona Diamondbacks, 2001: Schilling started his 2001 postseason with back-to-back-to-back complete-game wins against St. Louis (two) and another against Atlanta, including a 1–0 shutout to start the postseason against the Cardinals. Then in the World Series against New York, Schilling made starts in Games 1, 4, and 7, going seven innings or more each time and only in Game 7 did he allow more than one run (two.) Overall he finished with a 4-0 record with a 1.12 ERA.