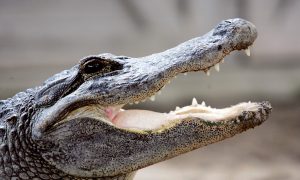 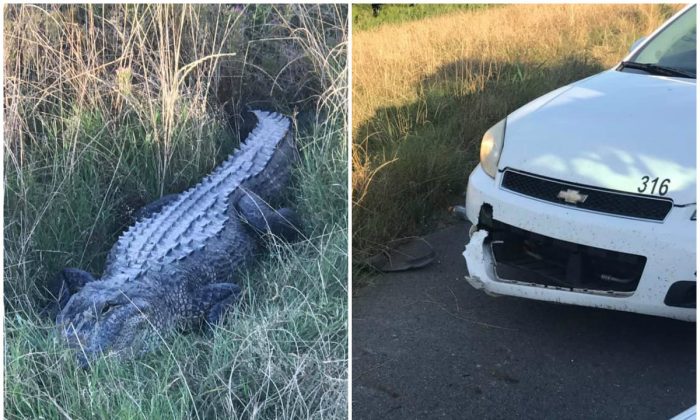 Deputies said an 8-foot-long alligator that was spotted on a Louisiana highway on June 10 took a bite out of their patrol car before it got away.

The officers responded to the middle of Highway 1 in north Caddo Parish after receiving a report the reptile was loitering in the area. They tried to contain the animal before wildlife experts arrived but it wasn’t going to have any of it.

Instead, the gator managed to escape after taking a bite out of their patrol car.

The officers posted photos of the reptile and the damage it caused to the vehicle.

The post garnered a lot of attention of people on the internet, many who found the incident amusing.

“Will he be charged with Bite & Run upon apprehension??” one asked.

“He literally took a bite out of crime,” another wrote.

“Omg! Have fun filing an insurance claim on that one!” another person said.

In another close encounter last month, an 11-foot-long alligator was spotted inside a Florida home after going through the window.

The Clearwater Police Department said the “unwanted overnight visitor” broke into the home through some low windows in the kitchen. The owner of the home then called the police and officers and trappers went to the scene.

The alligator was eventually captured and nobody was injured, police said.

The owner of the home, Mary Wischhusen, saw the alligator at around 3:30 a.m. when she went to the bathroom.

“I heard this huge, monstrous crash, like the whole roof was falling in on the side of my house,” she told Fox13. “I headed for the kitchen and as I got to the door of the kitchen, I had this beautiful face staring at me as though he belonged there. This 10-foot gator was having a marvelous time sitting in my kitchen.”

The gator apparently came in through her floor-to-ceiling windows before knocking over furniture and damaging walls.

“I decided I wasn’t staying there, so I went back to my bedroom and closed the door and called the police,” Wischhusen recalled. “I was hyperventilating a little, so what I did was I went on the computer and played games to settle down.”

In a less terrifying alligator-related story, a Florida couple discovered the gender of their unborn child with the help of their pet alligator, Amos, reported Fox News.

Stacie Childs-Wright and her husband Chad Wright allowed their pet reptile to reveal the gender of their next child by dangling a black balloon attached to a long pole in front of the gator.

In a video, which the Wrights filmed, Amos bites into the balloon, which bursts into a puff of pink powder.

According to the news website, Amos has been part of the family since 2000.