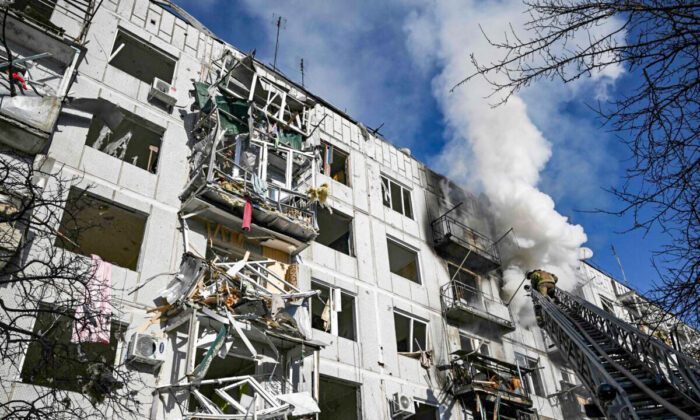 Firefighters work on a fire on a building after bombings on the eastern Ukraine town of Chuguiv on Feb. 24, 2022. (Aris Messinis/AFP via Getty Images)
Europe

Moscow-led attacks on military units in Ukraine killed at least eight people and wounded 14 others, Ukraine’s Ministry of Internal Affairs said on Thursday.

Shortly after Russian President Vladimir Putin announced a “special military operation” in Ukraine on Thursday, explosions were reported across the country, including in Ukraine’s capital Kyiv, as well as in other cities, including Kharkiv, Mariupol, and Odessa.

Ukraine’s Ministry of Internal Affairs said in a statement Thursday that six people were killed and seven were wounded in a bombing incident in the city of Podolsk, in the Odessa province, noting that 19 people were still missing.

Local Odessa resident Farid Agayev told The Epoch Times that his family was woken up at roughly 5 a.m. local time to the sound of an explosion and car alarms going off.

Another person was killed and two more were injured during shelling in the city of Mariupol in the Donetsk region, the ministry said.

And in the village of Berda in the Berdyansk district, one person was killed and five others were wounded after an air defense military unit was targeted in the early hours of Thursday morning, officials confirmed.

Russia’s ministry of defense issued a statement saying that its military is targeting Ukraine’s military infrastructure.

“Nothing is threatening Ukraine’s civilian population,” it said in a statement.

Ukraine’s Command of Joint Forces said Thursday that at least five Russian aircraft and one helicopter were shot down.

“On Feb. 24, 5 aircraft and an aggressor helicopter were shot down near the area of the Joint Forces,” the command said on Facebook.

“The Joint Forces give a worthy rebuff to the armed forces of the Russian Federation,” is said in a statement.

“Russia has attacked our military infrastructure, our border guards,” Zelensky said. “Explosions were heard in many cities of Ukraine.”

Zelensky urged civilians to stay home where possible. A day earlier, Ukraine imposed a nationwide state of emergency lasting for 30 days, and urged citizens in Russia to leave immediately.

Declaring martial law imposed harder restrictions than a state of emergency, and could include bans on meetings, movement, and political parties.

Putin has claimed that his “special operation”  is intended to “protect civilians and demilitarize Ukraine,” and is a response to threats coming from Ukraine.

Zelensky has directed the head of Ukraine’s armed forces, Maj. Gen. Valeriy Zaluzhny, to “inflict maximum losses against the aggressor,” according to AFP.