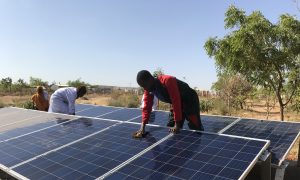 Eight American citizens were among the 157 killed when Ethiopian Airlines flight ET302 went down in unexplained circumstances shortly after takeoff.

Officials at Ethiopian Airlines gave an update on the nationalities of the passengers aboard the flight, which, besides the eight Americans, included nine Ethiopians, 18 Canadians, and 32 Kenyans.

The statement said “it is too early to speculate on the cause of the accident” and that a further investigation will be carried out “in collaboration with all stakeholders including the aircraft manufacturer Boeing, Ethiopian Civil Aviation Authority and other international entities.”

Ethiopian Airlines CEO Tewolde Gebremariam was cited by The Sun as saying that the pilot had an “excellent flying record” and the plane had “no known technical problems.”

Reuters cited Tewolde as saying that the pilot, who had logged over 8000 cumulative flight hours, reported trouble and asked for permission to return to the Addis Ababa airport.

“The pilot mentioned that he had difficulties and that he wanted to return. He was given the clearance (to return back),” said Gebremariam during a news conference.

In a bulletin published by Ethiopian Airlines on Twitter, Gebremariam was cited as saying he “deeply regrets the fatal accident” and “expresses his profound sympathy and condolences to the families and loved ones of passengers and crew who lost their lives in the tragic accident.”

The aircraft had shattered into many pieces and was severely burnt, a Reuters reporter at the scene of the crash said.

Boeing sent condolences to the families and said it was ready to help investigate.

“A Boeing technical team is prepared to provide technical assistance at the request and under the direction of the U.S. National Transportation Safety Board,” the company said in a statement.

At Nairobi airport, many relatives of passengers were left waiting at the gate for hours, with no information from airport authorities. Some learned of the crash from journalists.

“We’re just waiting for my mum. We’re just hoping she took a different flight or was delayed. She’s not picking up her phone,” said Wendy Otieno, clutching her phone and weeping.

Ethiopia’s state television issued the initial announcement confirming that all 149 passengers and eight crew members aboard the crashed Ethiopian Airlines flight are dead.

“There are no survivors onboard the flight, which carried passengers from 33 countries,” said state-run Ethiopian Broadcasting Corporation, citing airline sources.

The Boeing 737 passenger jet was heading from the Ethiopian capital of Addis Ababa to Kenya’s capital city of Nairobi when it went down.

“The aircraft B-737-800MAX with registration number ET-AVJ took off at 8:38 a.m. local time from Addis Ababa, Bole International Airport and lost contact at 8:44 a.m.,” the airline said in a statement.

“The office of the PM, on behalf of the Government and people of Ethiopia, would like to express it’s deepest condolences to the families that have lost their loved ones on Ethiopian Airlines Boeing 737 on regular scheduled flight to Nairobi, Kenya this morning.”

The state-owned Ethiopian Airlines calls itself Africa’s largest carrier and has ambitions of becoming the gateway to the continent.