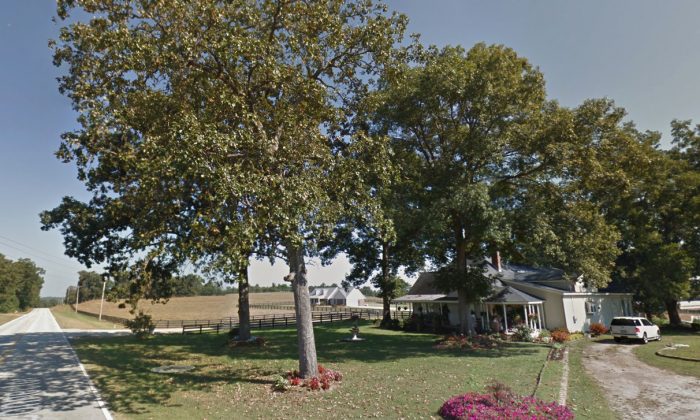 Whispering a prayer to the dispatcher one second, hollering a challenge the next as she fired a warning shot with her pistol, a 79-year-old woman was recorded in a dramatic midnight 911 call as she tackled a 20-year-old burglar.

When deputies arrived at the house in Jackson County, Georgia, on Feb. 12, they found a burglar cowering in the closet.

He was later named as Hans Edward Rogers, charged with burglary and home invasion, according to county jail records.

The homeowner heard someone trying to get in a window and went to her back door to look out, at which time a black male was standing there.

In the recording of the dispatch call,  obtained later by WXIA, the woman can be heard repeatedly challenging what she initially thought were two invaders in her home.

“They’re trying to get in the back door,” the woman tells the dispatcher about 30 seconds into the call. “Hurry. Hurry. Please.”

The 911 dispatcher asks her where she is in the house.

“I’m in the kitchen, and  I’m watching the door that they were trying to get in. Ooh, they’re breaking glass,” she said.

The burglar cowered in a closet until deputies arrived to arrest him — a 20-year-old man subdued by a 79-year-old woman.

Then she can be heard shouting, “Okay, come on! I got something for you!”

As the 911 dispatcher tries to discourage her from confronting any attackers, the sound of a gunshot is heard.

According to WXIA, she had fired a pistol outside in the direction of the burglar, who then ran round to another door, and broke in.

As the dispatcher continues to reassure her that law enforcement is on the way, the woman said that she can hear the intruder upstairs, ransacking the rooms and apparently talking.

She waits for another two minutes in the kitchen, then her voice can be heard shouting “I’m waitin’ on ya’, come on! When you come down those stairs I’m gonna blow your damn brains out!”

PRESS RELEASE On Tuesday, February 12, 2019 at approximately 12:17 hours, a home invasion and burglary…

Around seven minutes into the call, the woman can be heard shouting upstairs, then a shot is heard. “Come on punk!” she shouts. ” Come on down if you’re serious!”

This time, she had fired toward the second floor.

Around eight minutes into the call, law enforcement enters the downstairs of the building, with Rogers now cowering upstairs.

Rogers is in the Jackson County Jail without bond, charged with felony first-degree burglary and felony home invasion, and with misdemeanor criminal trespass.

He was driving his mother’s car along a nearby highway when his car ran out of gas, reported KDVR. He left his car and around midnight and helped himself into the woman’s house.

The woman’s daughter said the sheriff told them the suspect has a history of medical issues and needs prescription medication, which he did not have with him that day, reported News 9.

“She didn’t allow herself to become a victim,” the woman’s daughter told WXIA. “My mother’s a very strong woman. I know where I get my strength from, now.  As a matter of fact, I think she’s a little stronger.”

“I don’t know if I could have handled that situation as well as she did,” the daughter continued. “My mother’s a very spiritual person … if she wanted to hit him, she could have hit him … She just wanted to keep him off of her.”

She said that her mother hadn’t been aiming for Rogers when she fired both times, but was only trying to keep him away.

Under Georgia state law, homeowners do not have to apply for a license to keep a gun in their own homes, although a license is required to carry one outside.