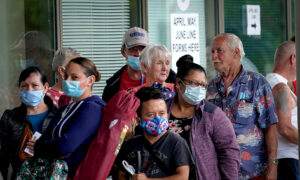 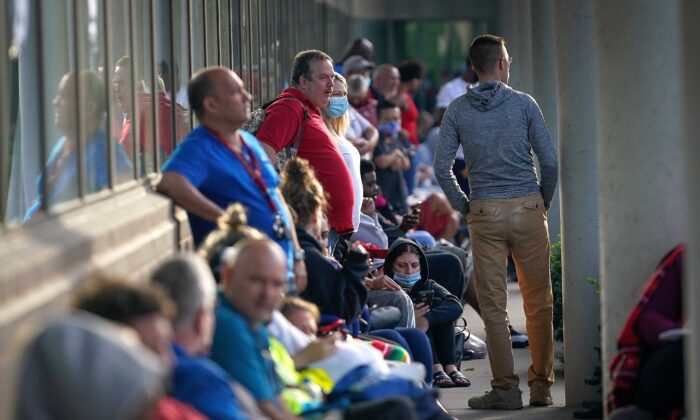 People line up outside Kentucky Career Center prior to its opening to find assistance with their unemployment claims in Frankfort, Ky., on June 18, 2020. (Bryan Woolston/Reuters)
Economy

Economists polled by Reuters predicted the jobless claims number would come in at 830,000.

In addition to regular jobless claims, 348,912 workers in 48 different states nationwide filed for “Pandemic Unemployment Assistance,” the department stated, which is provided to those not traditionally eligible for unemployment benefits as a direct result of the CCP (Chinese Communist Party) virus, like self-employed and independent contractors, among others.

The figures have remained very high for several months and January wasn’t a great month for job recovery because the pandemic triggered an increase in jobless claims.

The numbers have, however, improved since a record of nearly 6.9 million Americans filed for unemployment benefits in March last year when the pandemic first hit U.S. shores.

“Some 44 weeks into the pandemic caused downturn, unemployment claims remain very much elevated in the latest week,” Bankrate.com senior economic analyst Mark Hamrick said in an emailed statement to The Epoch Times in mid-January.

Part of the elevation in claims reflects people reapplying for benefits after the government in late December renewed a $300 unemployment supplement until March 14 as part of a package worth nearly $900 billion in additional pandemic relief.

According to a Reuters poll of economists payrolls likely increased by 50,000 jobs in January after declining by 140,000 in December.

But some economists are bracing for a second straight month of job losses. The Conference Board’s survey last week showed consumers’ perceptions of labor market conditions deteriorated further in January.