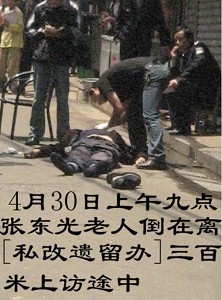 On April 30, 77 year-old Zhang Dongguang passes away on his way to seek justice. (Wang Baifan)
China

On April 30, Zhang Dongguang, a 77 year-old man seeking justice, collapsed 300 meters away from the office building where he had appealed for the past 13 years.

Mr. Zhang was from Changsha City of Hunan Province. In 1958, his house was confiscated in the so-called “socialist reformation.” In 1960, the public security bureau wrongly accused him of “engaging in conspiracy” and sentenced him to 10 years of imprisonment. After his release, the authorities gave him reparation of 1,000 yuan ($130) for his time spent in jail, but his home was never returned.

Since 1994, Zhang had been going to the Changsha City Property Office daily, with the exception of holidays and sick-days, to appeal for the return of his home. Thirteen years later and without his home, Zhang collapsed no more than 300 meters away from the office.

Under the scrutiny of hundreds of people the public security blocked the road and stopped the traffic for two hours. The police pushed the onlookers away and attempted to forbid photographs from being taken.

After May 1, the real estate manager of Changsha plans to personally go to Changsha's Property Office and demand answers and proper justice for the deceased Mr. Zhang.