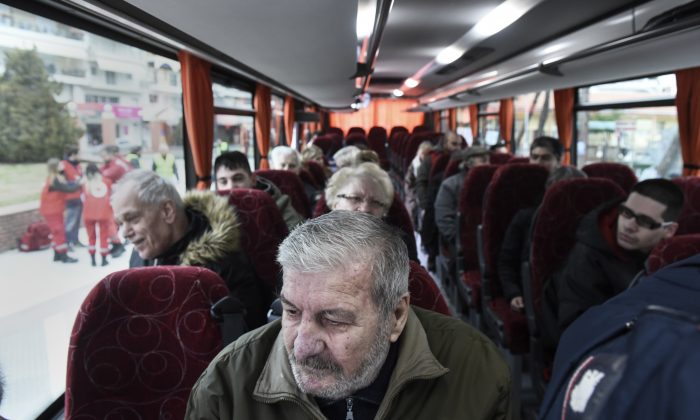 Residents of Kordelio district are seen aboard a bus after authorities ordered the evacuation of the area in order to defuse a 500-pound unexploded World War II bomb, in Thessaloniki, Greece, on Feb. 12, 2017. (AP Photo/Giannis Papanikos)
International

75,000 Evacuated in Greece So WWII Bomb Can Be Defused

Bomb disposal experts started their work at 11.30 a.m. (0900 GMT), 90 minutes later than planned, as police went house-to-house, reminding late risers and other stragglers to leave their homes. Authorities were clearing out a 1.9-kilometer (1.18-mile) radius around the bomb site, mostly in the western suburb of Kordelio.

Many people left in their cars, but some were being bused to schools and sports halls elsewhere in the city, where they can find food and shelter.

“We heard on TV that, if the bomb explodes, it will be like a strong earthquake,” a worried Michalis Papanos, 71, told The Associated Press as he and his wife, Yiannoula, headed out of their home.

Others, like 26-year-old Alexander Bogdani and his wife, Anna Bokonozi, left on foot. The couple, pushing a stroller with their toddler daughter, were going to a place about 1 kilometer (over 1/2 mile) from their home.

“They have warned us … we are afraid for the child,” Bogdani said.

The city’s main bus station was shut down, trains in the area were halted and churches canceled their Sunday services. The city also booked a 175-room hotel where people with limited mobility and their escorts were taken on Saturday.

“This is the largest population move in peacetime. People must be calm and not panic,” Central Macedonia governor Apostolos Tzitzikostas said.

Among the evacuees were 450 refugees staying at a former factory, who were transported by bus to visit the city’s archaeological museum.

Army bomb disposal experts will attempt to defuse the bomb’s detonator, and then transport it to an army firing range, where they will figure out what further steps to take, said army spokesman Col. Nikos Fanios.

One resident says he recalls the day the bomb fell.

“The bombing was done by English and American planes on Sept. 17, 1944. It was Sunday lunchtime,” said Giorgos Gerasimou, 86, whose home is half a mile away.

The Allies were targeting local German rail facilities, he said.