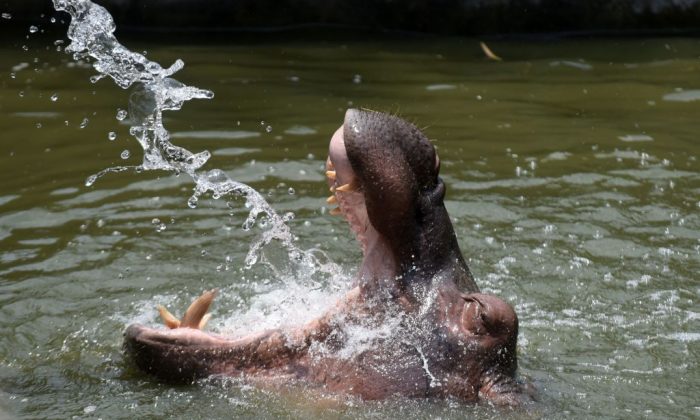 A hippopotamus is sprayed with water on a hot summer day. (ARUN SANKAR/AFP/Getty Images)
US

A Michigan woman was killed by a hippo while on an African safari. Seventy-five-year-old Carol Kirken was with her family at the time of the attack. She died in her son’s arms on Aug. 5, in Tanzania, according to a Fox News report.

“Having past 75 years old, she was resolutely shooting for 100. She would have surely achieved it if not for this accident,” wrote the family in her obituary.

Kirken posted Facebook updates and photos from Africa all the way up to the day she was killed, as Fox News reported. On Aug. 5 she wrote about witnessing a hippo migration, and posted a photo. The posts have since been removed.

Kirken was a businesswoman and was active in her community. “There are few people in the community that you think of that are absolute treasures and Carol is one of those in our community,” said Rochester Hills Mayor Bryan Barnett to Fox 2. “She is a person who left a positive mark in this community and there are a lot of people who’ve benefited because of her passion.”

Kirken’s family has not spoken on the specifics of the attack. They are still trying to get her body back to the United States. Yesterday, the Rochester Hills community hosted a farewell gathering at a local funeral home.

“She was one among the few people in this world who well beyond the duties of their careers truly cared for the well being of others and always saw the good over the less noble qualities in people. May God welcome her home and bless her surviving family. Her memory will live forever,” wrote a local physician as tribute to Kirken, posted on the website of Modetz Funeral Homes.

Hippopotamuses are the most dangerous large land animal, as BBC reported. Hippos are territorial and aggressive. They often attack boats. Instead of fleeing from danger, they often choose to attack. Hippos don’t eat meat or other animals, but they use their huge teeth to defend themselves or to attack those invading their territory.

“Hippos can be testy and brutal when it comes to defending their territory and their young. Though they occasionally spar with crocodiles, a growing number of skirmishes are with humans. Hippos have trampled or gored people who strayed too near, dragged them into lakes, tipped over their boats, and bitten off their heads,” as reported in a Smithsonian article.

Many people die from hippopotamus attacks in Africa. Villagers in Niger started a massacre of hippos in March of this year. “The locals have killed a large number of hippopotamuses, although this species is protected,” Environment Minister Almoustapha Garba said on state radio, as reported by Fox News. Although tourists are attracted to hippos, they present a physical danger to locals, and have destroyed crops and livestock.