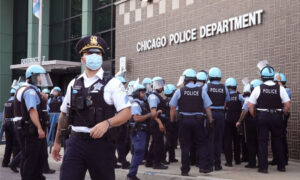 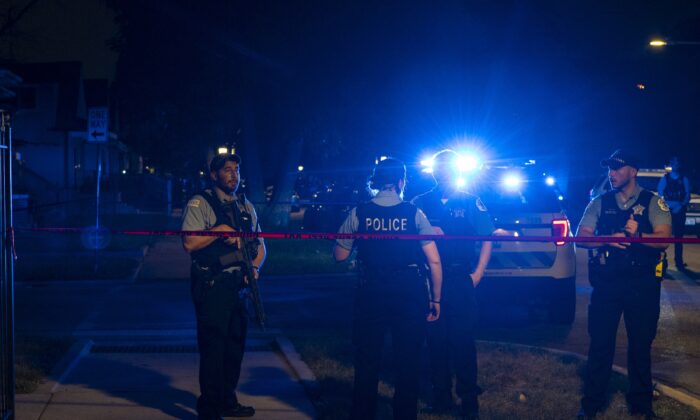 Chicago police work the scene where two police officers where shot during a traffic stop in the 6300 block of South Bell in the West Englewood neighborhood on Aug. 7, 2021. (Tyler LaRiviere/Chicago Sun-Times via AP)
Crime and Incidents

73 Shot, 10 Killed in Chicago Over the Weekend: Police

A total of 73 people were shot in Chicago over the weekend, with 10 murders recorded, the Chicago Police Department (CPD) said on Aug. 9.

The shootings left 63 people injured and 10 dead in the third-largest city in the United States.

Nine other shootings took place in the city on Aug. 6 before 6 p.m., according to incident reports compiled by the CPD.

In one incident, a 29-year-old female police officer identified as Ella French was gunned down during a traffic stop on Aug. 7. A second officer on the scene was left injured.

It was the first time since 2018 that a Chicago police officer was fatally shot in the line of duty.

“We have a common enemy: it’s the guns and the gangs,” Chicago Mayor Lori Lightfoot, a Democrat, said during a press conference on Aug. 8.

“Eradicating both is complex, but we cannot let the size of the challenge deter us. We have to continue striking hard blows every day. No gang member, no drug dealer, no gun dealer can ever have a moment of peace on any block in any neighborhood, not in our city. To get there, we must be united and single-minded in our determination to do just that.”

Police haven’t linked the shooting to illegal guns or gangs. They said they’re questioning three suspects, none of whom have been identified publicly. A male passenger is believed to have opened fire on the officers.

Other shootings over the weekend left multiple people wounded.

A 4-year-old girl was struck in the foot while on a sidewalk on the evening of Aug. 6 in the 4000 block of West Washington Blvd. A 19-year-old male accompanying her was also struck. He was in critical condition at the hospital; the girl was in good condition.

Just after midnight, three women suffered gunshot wounds while traveling by car on 105th Street. They drove themselves to the hospital and were in stable condition.

In another Aug. 7 shooting, four men were struck when a person inside a vehicle opened fire. The men, who were on the street in the 200 block of South Maplewood Avenue, were all listed in critical condition, except for one who was in good condition.

One of the Aug. 8 shootings unfolded at approximately 12:23 a.m. in the 11400 block of South Throop Street. People at a gathering heard gunshots near them, and several were struck. They were all listed in good condition.

The trend in Chicago of police being unable to pinpoint shooters continued over the weekend. For the overwhelming majority of the shootings, the CPD said they had no one in custody.