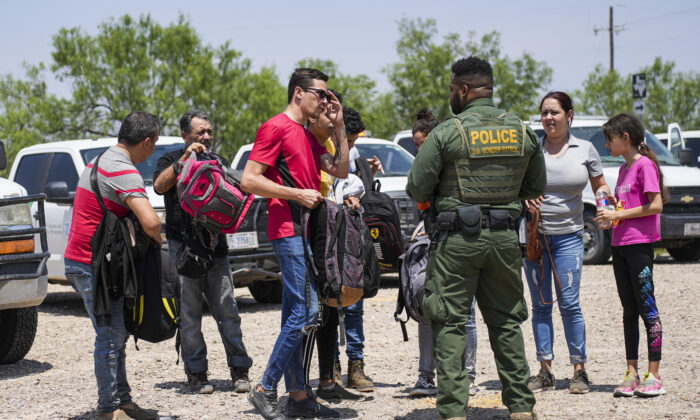 Gone are the days when most illegal border-crossers were easy-to-return, single male Mexicans looking for work.

Almost three-quarters of the nearly 200,000 people apprehended along the southern border in July were foreign nationals from countries other than Mexico, according to Customs and Border Protection (CBP) data.

Of those illegal aliens encountered, 99,000 were from countries other than Mexico, Guatemala, Honduras, or El Salvador.

CBP only provides data on some nationalities, so it isn’t clear how many countries are represented in the numbers; however, officials have previously noted it’s more than 160.

In the first 10 months of this fiscal year, Border Patrol agents along the U.S.–Mexico border arrested more than 1.8 million people after they crossed illegally between ports of entry. A further 800,000 are known to have evaded Border Patrol after entry. It’s impossible to estimate how many more weren’t detected or apprehended.

Border Patrol agents apprehended 66 individuals on the terrorist screening database between ports of entry on the southern border over the past 10 months.

In 10 months, more than 1 million illegal aliens have been released into the United States while they await their immigration court proceedings, according to CBP data.

“While the encounter numbers remain high, this is a positive trend and the first two-month drop since October 2021,” CBP Commissioner Chris Magnus said in an Aug. 15 statement.

“DHS [Department of Homeland Security] has been executing a comprehensive and deliberate strategy to secure our borders and build a safe, orderly, and humane immigration system,” the statement reads.

Cuban nationals have flooded across the southern border since the beginning of the 2022 fiscal year, which began on Oct. 1, 2021, and ends on Sept. 30.

Border Patrol agents have arrested more than 175,000 Cubans during the past 10 months. That’s equal to about 580 Cubans entering illegally every day and a 359 percent increase from fiscal year 2021, when just over 38,000 Cubans were apprehended.

Venezuelans are the next largest group to cross the border, with border agents apprehending 128,376 in the past 10 months. The increase over fiscal year 2020, when just 1,262 Venezuelans were apprehended, is a remarkable 10,000 percent.

There has been an increase in the number of Ukrainians without legal entry papers presenting themselves at ports of entry, rather than crossing in between. In the past 10 months, 64,348 Ukrainians have sought entry, compared to fewer than 10,000 in the previous two years.

Chinese nationals are the same, preferring to enter at ports of entry without legal entry papers.

The DHS says its border strategy is “based on six pillars: surge resources; increase efficiency to reduce strain on the border; employ an aggressive consequence regime; bolster the capacity of NGOs and partner with state and local partners; go after cartels and smugglers; and work with our regional partners.”

“This comprehensive plan leverages a whole-of-government approach to prepare for and manage the current and anticipated increases in encounters of noncitizens at our Southwest Border,” it says.