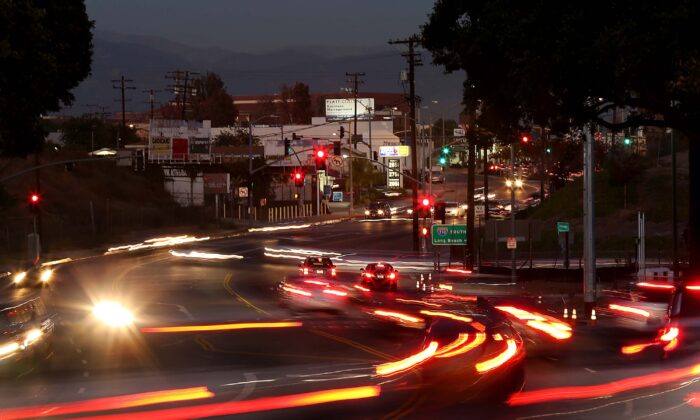 The 710 Freeway intersects with Valley Boulevard at its northern terminus in Alhambra, California, in a 2015 file image. (Luis Sinco/Los Angeles Times/TNS)
US News

710 Freeway Expansion Dropped After Decades of Planning, Marking a Milestone for L.A.

LOS ANGELES—A decades-old plan to widen one of America’s busiest cargo corridors was scrapped Thursday, as the agency acknowledged it must find a new way to lessen traffic without adding lanes.

The Los Angeles County Metropolitan Transportation Authority unanimously voted to end the $6 billion expansion plans for most of the 710 Freeway, where port-bound trucks idle in traffic-choked lanes and nearby communities struggle with high rates of asthma and poor health.

“It’s monumental that one of the biggest urban areas of the country is really thinking twice, before prioritizing goods movements over health,” said Laura Cortez, an organizer and co-executive director of the East Yard Communities for Environmental Justice.

The local group formed about 20 years ago to fight the expansion and combat pollution from a nearby railyard. Their fight illuminated the struggles of a community living in the shadow of commerce. Billions of dollars worth of televisions, furniture and other goods from the port are shipped onto trucks that barrel along the 710 and are then loaded onto trains headed to the rest of the country.

The freeway and the working-class communities’ ills became a potent symbol of a larger effort playing out across the state: to stop freeways that shape, divide and hurt neighborhoods, especially those where people of color live. The Los Angeles Times found that more than 200,000 people nationwide have lost their homes because of federal road projects over three decades. The largest recent highway expansions, including in California, have forced out residents in Black and Latino neighborhoods at a disproportionately high rate.

Black and Latino residents make up an estimated 83 percent of the 1.2 million people who live along the 710 corridor. They endure some of the worst air quality in the country. The area accounts for about 20 percent of all particulate emissions in Southern California, according to Metro.

“This is a wake-up call to policymakers around the nation that we cannot solve our transportation problems with road-widening projects,” said Adrian Martinez, a senior attorney for Earthjustice. “Road-widening projects double down on the same failed strategy, adding even more pollution to the already overburdened communities who live alongside our nation’s busy freight corridors.”

A first-in-the-nation bill that seeks to block freeway widening in areas of the state with high levels of pollution and poverty is making its way through the Legislature. Its author, Assemblywoman Cristina Garcia, a Democrat, lives four blocks from the 710 Freeway. She said her parents who live nearby suffer from respiratory issues.

Metro’s vote has long been anticipated as the plans to add a lane in each direction along a 19-mile stretch of the freeway from Long Beach to East Los Angeles have been on life support for years.

Amid pressure from residents, Metro, the lead agency on the plan, four years ago tabled a scheme that would have displaced hundreds and added the lanes. But planning continued. Last year federal environmental regulators struck a serious blow to any hopes of widening. They found the plan could violate the Clean Air Act, noting the region already had “the worst air quality in the United States.”

Those findings created a domino effect and prompted the state’s top transportation official to drop his support of the plan, puncturing all hopes that the project would move forward. With no support from the state or federal agencies, Metro found itself abandoned after spending hundreds of hours and more than $50 million in planning on a doomed project.

And while plans have been put to rest, the agency will need to grapple with what to do next.

The 710 Freeway is the main artery for the nation’s largest port complex, through which nearly a third of the nation’s imported goods move. Big rigs carrying a crush of goods—as varied as electronics, auto parts and shoes—often clog the road. Activists call it the diesel death zone, but Americans with their appetite for click-shopping, have come to rely on the web of warehouses and deliveries that the port is built around.

A plan by Metro board member Janice Hahn approved Thursday will shift the $750 million in funds already secured for the 710 to improvements for Southeast Los Angeles communities along the freeway. It will also rename the 710 Task Force, an advisory group for the agency, to reflect its new direction.

“Our 710 communities are really looking for some quality-of-life improvements, as soon as possible,” she said. “We’re going to write a new chapter and now it’s time to improve our air quality, get to zero emissions with vehicle traveling along that freeway, and make our freeways, our streets safer.”

Already officials and residents are clamoring for projects. Air filtration in schools, sound walls, access to the Los Angeles River and new regional transit are among some of the pitches Hahn has already fielded.

Cortez, who sits on the task force, said she wants the priority to be focused on residents who bear the brunt of the corridor and often depend on it. As a child, her elementary school track field abutted the freeway. And as an adult, she’s dedicated her career to trying to limit the freeway’s damage to neighboring communities.

The stream of residents, activists and elected officials who spoke ahead of the vote had their own ideas of what to do with the empty land designated for the expansion. One resident suggested adding more open space and a dog park. But most decried the pollution the 710 has already wrought.

“Please give us clean air,” one said bluntly. “You are killing us here.”