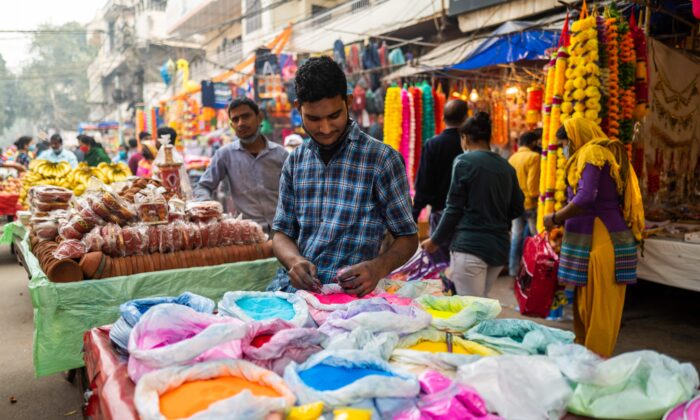 A vendor packs color powder used to make decorations for Diwali, the Hindu Festival of Lights, as he waits for customers in a market area in New Delhi on Nov. 14, 2020. (Jewel Samad/AFP via Getty Images)
India

NEW DELHI—Amid the ongoing India–China conflict and rising anti-China sentiment, 71 percent of Indians consciously refused to buy Chinese products during the just-concluded Diwali festival, according to a national survey.

Diwali is a national holiday in India in which people decorate their homes with lights and exchange gifts. After a recent deadly clash with China, India has witnessed many popular campaigns for boycotting Chinese products.

“After over 20 Indian soldiers were martyred in Galwan valley by their Chinese counterpart in June this year, the anti-China sentiment grew in India,” said LocalCircles, India’s leading community social media platform, which surveyed 14,000 respondents in 204 districts of India.

“48% of consumers had admitted to buying China-made products during the festive season last year which dropped down to 29% this year marking a 40% year-over-year decline in terms of absolute numbers of Indian consumers buying made-in-China products.”

The Confederation of All India Traders (CAIT) gave its own calculation of the losses suffered by the Chinese in the Indian market and thanked the Indian traders and consumers for the achievement.

The confederation said Indian traders made sales of over $9.71 billion while the Chinese recorded losses of $5.4 billion during this year’s Diwali season.

“The records are from 20 major cities amid a boycott of Chinese products,” said CAIT. “The kind of Aatmanirbhar Bharat [self-reliant India] we all aim for.”

The confederation, which claims to represent 70 million Indian traders and 40,000 trade associations, released a list in June of 500 categories of Chinese products to be boycotted and replaced by Indian products.

In an opinion piece published immediately after the bloody conflict in June, Chinese state mouthpiece the Global Times called the China boycott campaigns in India “irrational” and blamed the United States and Indian Prime Minister Narendra Modi’s government for them.

The survey platform said those who purchased Chinese products did so because they were cheap. Those who refused to buy Chinese products said the Indian products are generally more expensive but probably also of better quality.

“While on an overall basis, the Indian consumer did spend less on Chinese products this year, the key takeaway for the Government of India and MSMEs [micro, small, and medium enterprises] is to make manufacturing more competitive in India and improve scale,” LocalCircles wrote.

“If the high-quality products that are Made in India can be produced at scale and the cost of capital for Indian MSME is reduced through Government support, products Made in India will definitely find preference amongst Indian consumers and even other retail markets around the world.”

During his Independence Day speech on Aug. 15, Modi called for a self-reliant India and said the country will make products for the world.

“Our country has plenty of natural resources. It is the need of the hour that we start the value addition of these natural resources and human resources, and to take the country to new heights,” he said.