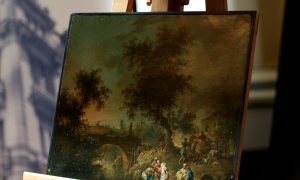 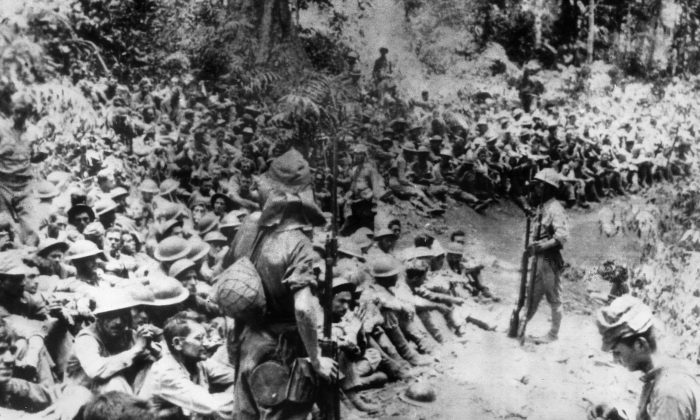 FILE - In this 1942 file photo provided by U.S. Marine Corps, Japanese soldiers stand guard over American war prisoners just before the start of the Bataan Death March following the Japanese occupation of the Philippines. (U.S. Marine Corps via AP, File)
US

70 Years On, Japanese Firm to Apologize to US WWII Veterans

WASHINGTON—A major Japanese corporation will offer a landmark apology this weekend for using U.S. prisoners of war for forced labor during World War II, according to the Simon Wiesenthal Center that is hosting the event.

A senior executive of Mitsubishi Materials Corp. will apologize to 94-year-old James Murphy, of Santa Maria, California, and relatives of other former prisoners of war (POWs) who toiled at plants its predecessor company operated in Japan during the conflict.

Rabbi Abraham Cooper, associate dean at the center—an organization that primarily educates about the Holocaust—called it an important gesture, coming as it does ahead of August’s 70th anniversary of the end of the war, which has heightened scrutiny of Japan’s attitude toward its past abuses.

At least it is a step in the right direction after all these years.
— Lester Tenney, former POW

“As far as I know, this is a piece of history,” said Cooper, who is helping moderate the closed-door meeting on Sunday at the center’s Museum of Tolerance in Los Angeles. “It’s the first time a major Japanese company has ever made such a gesture. We hope this will spur other companies to join in and do the same.”

A press release from the Wiesenthal Center said the apology will be made by Hikaru Kimura, senior executive officer for Mitsubishi Materials Corp. The company did not immediately respond to a call seeking comment late Monday. Mitsubishi Materials U.S.A. Corp. said Tuesday it had no information about it.

Masato Otaka, spokesman for the Japanese Embassy in Washington, said to the extent of his knowledge, it was an initiative of Mitsubishi Materials. He said the Japanese government is not involved.

Japan’s government issued a formal apology to American POWs in 2009 and again in 2010, but until now, the dwindling ranks of veterans have gained little traction in their demand that the Japanese corporations that used them as slaves at mines and industrial plants under often brutal conditions do the same.

It was slavery in every way: no food, no medicine, no clothing, no sanitation.
— James Murphy, former POW

Some 12,000 American prisoners were shipped to Japan and forced to work at more than 50 sites to support imperial Japan’s war effort, and about 10 percent died, according to Kinue Tokudome, director of the U.S.-Japan Dialogue on POWs, who has spearheaded the lobbying effort for companies to apologize.

Japan’s government recently acknowledged that tens of thousands of South Koreans, Chinese, and World War II POWs were conscripted to fill labor shortages at factories, mines, and other sites as part of its successful attempt to win U.N. world heritage status for 23 historical Japanese industrial sites.

Tokudome said Mitsubishi Materials will be apologizing for its use of forced labor by some 900 American troops at four locations operated by its predecessor company, Mitsubishi Mining Co. Only two living survivors of that ordeal could be located to accept the apology, and of them, only Murphy is fit enough to make the trip to Los Angeles.

Speaking by phone from Santa Maria, California, Murphy recounted how he was shipped to Japan as a POW, two-and-a-half years following his capture in the Philippines, where he was serving as a radio operator for the U.S. Army Air Corps. He had survived the notorious Bataan Death March, during which thousands of Americans and Filipinos are believed to have perished as they were made to trudge 65 miles to prison camps after their defeat by Japanese forces.

Murphy spent one year at a copper mine near Hanawa with about 500 other POWs, an experience he described as “a complete horror.”

“It was slavery in every way: no food, no medicine, no clothing, no sanitation,” Murphy said, adding that it was all the more painful knowing that Mitsubishi built fighter aircraft used against American forces.

He said he forgave his captors after the war, but has hankered for an apology for 70 years. He participated in a failed class action lawsuit attempting to sue the Japanese government for the year he spent in the copper mine. No money is being offered by the corporation, but Murphy said he considered the upcoming apology “a big deal.”

Murphy said if other companies followed suit, it would help provide closure for surviving POWs and build a better relationship between Japan and the United States, both already close allies.

Another former POW, Lester Tenney, 94, who met briefly with Japanese Prime Minister Shinzo Abe during a high-profile visit to Washington in April, reserved comment on the planned apology until he hears it, but added, “At least it is a step in the right direction after all these years.”

During the war, Tenney was forced to work for a coal mine run by Mitsui Mining Company near the town of Omuta. He will also attend Sunday’s event.

A delegation from Mitsubishi Materials will then travel Tuesday to a small museum in Wellsburg, West Virginia, which commemorates American POWs who survived the Bataan Death March. A statement from the museum says the delegation will announce a donation to support educational programming at the museum, and Edward Jackfert, a former POW, will thank Mitsubishi Materials “for being the first Japanese company to come forth and publicly apologize.”