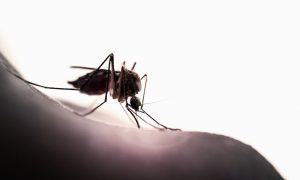 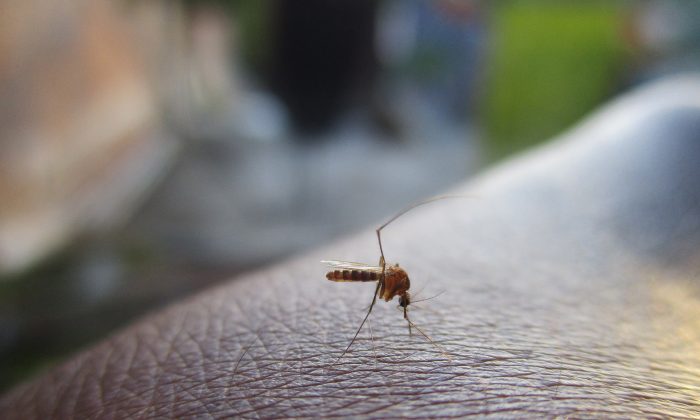 A stock photo of a mosquito on human skin. (Himas Rafeek/Pixabay)
US News

A health alert has been issued after a 7-year-old child in Ohio was diagnosed with La Crosse virus, a rare disease that is transmitted through the bite from an infected mosquito and causes brain inflammation and seizures.

According to a news release published on Aug. 15 by the Knox County Health Department, children under 16 years old are most likely to experience severe illness from the virus, which can lead to seizures, coma, paralysis, and a variety of neurologic complications after recovery.

The family of the affected child, who are from Mount Vernon, said they had been camping outside of Knox County, Ohio. Officials said they will inspect the area near the family’s home for potential breeding sites and Environmental Health Director Nate Overholt added that pesticides will be sprayed to prevent the spread of any further infections, according to the release.

Health officials cited in the release said the mosquito that infected the 7-year-old Mount Vernon child is an “aggressive” eastern tree hole mosquito that bites during the day time and is commonly found in wooded areas.

“This particular mosquito is known for laying its eggs in the holes of trees where water collects as well as other water collection sites. Anyone who lives near or spends time in wooded areas is at increased risk for LaCross virus,” warned Knox County Health officials.

The release also noted that many infected with the virus don’t display any obvious symptoms, but for those who do, they usually appear five to 15 days after the mosquito bite. Those symptoms are “non-specific” and include fever, headache, nausea, vomiting, and lethargy.

The rare and dangerous virus is an endemic in Ohio, with the state reporting more cases of infections than any other in the country at about 20 per year. Currently, there are 14 cases of La Crosse reported in 10 Ohio counties, including: Holmes, Franklin, Ashland, Geauga, Lawrence, Wood, Portage, Wayne, Hancock, and Trumbull.

The health department said the most effective way to prevent the infection is to avoid mosquito bites.

“Mosquitoes bite during the day and night. Whenever residents are in areas prone to mosquitos such as high grass, damp areas or wooded areas, they are encouraged to wear insect repellent, treating their skin, clothing and gear.”

West Nile Virus is up, La Crosse is up. Geographic shifts can be a small numbers incidence game, but CDC’s ArboNET reveals interesting patterns for arboviral case data in the USA; I commented on the new findings. ⁦@UFGeog⁩ ⁦@EPI_UF⁩ https://t.co/CjRW45lxqZ

Mosquitos will lay their eggs in even small amounts of water which will hatch in one or two days, the release warned.