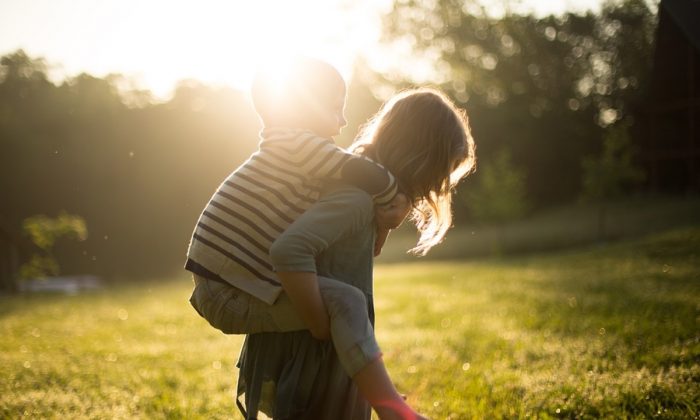 Stock image of siblings playing together. (Pexels/Pixabay)
US News

A 7-year-old saved his 20-year-old sister after she suffered a seizure and nearly drowned in their family pool in Brantley County, Georgia, last week.

Little brother, Aiden McCullough, and big sister, Morgan Smith, have always shared a loving bond, but this incidence cemented it unlike anything before, reported Action News Jax.

“I love my sister a lot,” McCullough told the outlet. “That’s my hero, my angel,” said Smith.

The 7-year-old doesn’t yet know the significance of what he did. When asked how he saved his sister, he told a CBS47/Fox30 reporter: “I don’t know. I just done it.”

I can’t wait to introduce you to seven-year-old Aiden McCullough and his sister, Morgan Smith. Aiden saved his sister’s life after she had a seizure in the pool. Only on @ActionNewsJax at 10 on FOX30, how the boy jumped into action. pic.twitter.com/jt2AsgOmBE

On the day of the near-fatality, it was, however, not that simple. Smith told the outlet that she started seeing black spots when she reached the last step of the pool and she doesn’t remember what happened after that.

McCullough saw her falling backward and he immediately got into action and jumped into the pool to save his sister.

The little boy said that he acted on his instincts and grabbed Smith by her hair and made sure her head was out of water.

Smith “would have drowned” if her little brother had not shown this presence of mind.

This is a picture of Aiden and Morgan embracing each other after he saved her life. The siblings were very close beforehand. Now, they said their bond is unbreakable. @ActionNewsJax pic.twitter.com/dh0aZCAsEv

“I know that there are real-life angels because I’m lucky enough to call him mine,” said Smith. “And I have an everyday savior in my life.”

When asked if he thinks he’s a hero, McCullough nodded his head and said: “Yes, I do.”

Smith was thankful that her brother was there for her when she needed him the most. “I love you and you are forever my hero and every day I’m only more thankful that I can call you my elder brother,” said Smith.

In a similar incidence, an 11-year-old girl saved her 6-year-old brother from an attempted abduction outside their home in Cleveland on May 23.

A man approached Julianne and Hayden Moore while they were playing outside their home at Old Brooklyn, reported Fox8.

Julianne said the man tried to talk to them but they couldn’t understand what he was saying. “It was like gibberish so we really didn’t think much of it,” the 11-year-old told Fox8.

She said after that the man walked away but suddenly turned back, grabbed Hayden by the hand and tried to pull him away.

“When he tried to grab my brother, I knew like this was serious. This was not like any handshake or anything,” Julianne said.

She said she followed her parents’ lessons who had always taught her to watch over her younger brother. “I just grabbed my brother and went into the backyard because there was no time to panic. You just have to go with it,” she said.

Their father Joshua Moore explained what happened that day: “My daughter came running back there with my son, dragging him by the arm and screaming. I said, ‘Julianne, what’s wrong?’ She said a man tried to abduct Hayden.”

Moore said he ran to where the children were playing and saw the man walking down the street.

The family reported the matter to the police and, based on Julianne’s description, the Cleveland Division of Police arrested Pedro Luyando, 33, of Cleveland on charges of abduction.