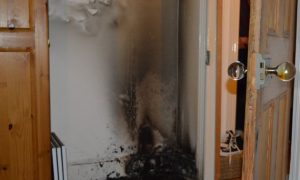 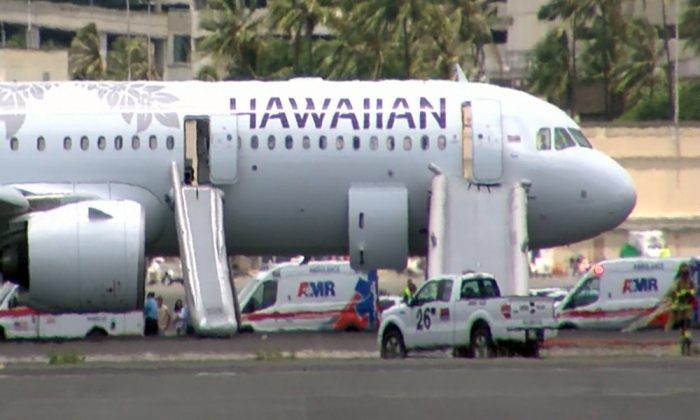 This image taken from video provided by Hawaii News Now, shows Hawaiian Airlines Flight 47 on a runway after smoke filled the plane's cabin, forcing an emergency landing and evacuation on Aug. 22, 2019 in Honolulu. (Hawaii News Now via AP)
US News

7 Sent to Hospital After Smoke Fills Cabin of Hawaii Flight

HONOLULU—Seven people were taken to the hospital on Thursday, Aug. 22, after smoke filled the cabin of a Hawaiian Airlines flight from California to Hawaii.

Hawaiian Airlines says 184 passengers and seven crew members used evacuation slides to get off the plane after it declared an in-flight emergency and landed in Honolulu.

American Medical Response spokesman James Ireland said a total of 11 patients had breathing complaints and seven were taken to the hospital with respiratory problems.

Breaking overnight: A Hawaiian Airlines plane was forced to make an emergency landing when the cabin filled with smoke. @ReporterBlayne has the latest information. pic.twitter.com/luDwBxhw9O

One person was examined at the scene for injuries sustained during the evacuation.

Snook said there was visible smoke in the cabin and a smoke indication in the cargo hold set off a warning in the cockpit, which prompted the emergency landing. He said there were no visible flames anywhere on the plane.

An automatic fire suppression system was activated in the cargo hold, Snook said.

He said smoke was still prevalent in the cabin after the plane landed, which is why the passengers were ordered to use the slides to evacuate the aircraft.

Shuttles took passengers, who left their luggage behind, to a staging area at the airport. Snook said Hawaiian Airlines is refunding passengers for the cost of their round trip tickets and will give passengers a voucher for future travel.

“It’s going to take a little bit of time to get the bags released from the aircraft, obviously we want to be sure that we understand what the source of the smoke was and one possibility, of course, is that the bags may have been a source,” Snook said. “We have no evidence to suggest that right now but we want to be cautious about taking the bags off.”

Snook thanked the crew and passengers for evacuating in an orderly way “in what could have been a complex and dangerous situation.”

Snook said the National Transportation Safety Board will be notified and conduct an investigation. The Federal Aviation Administration will also investigate, said spokesman Allen Kenitzer.

Firefighters said it took the passengers just 30 to 45 seconds to exit the aircraft. A few had only minor bruises from coming down the slides, said Glenn Mitchell, the airport’s fire chief.