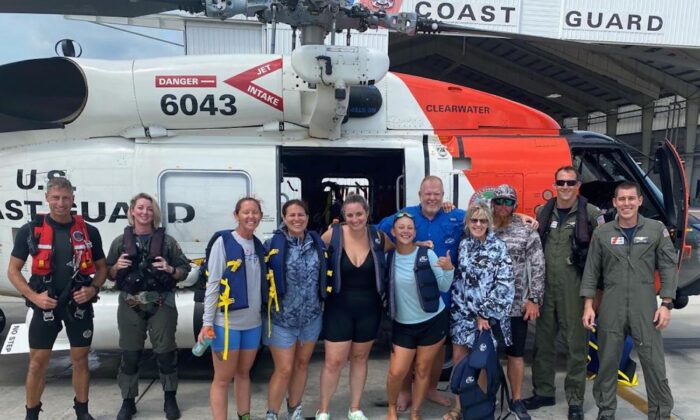 7 Rescued by Coast Guard After Lightning Strikes Boat Off Florida

The U.S. Coast Guard has rescued seven people after their vessel was struck by lightning off Florida.

A four-person aircrew from Coast Guard Air Station Clearwater traveled in an MH-60 Jayhawk helicopter to rescue the two men and five women, and brought them to the air station where their family members were waiting.

The search for the boat took nearly two hours.

According to a U.S. Coast Guard press release, the seven people were thankfully in good condition.

The Coast Guard District Seven command center found the vessel in distress after receiving an alert from the vessel’s emergency position-indicating radiobeacon (EPIRB).

An EPIRB is a portable, battery-powered radio transmitter that works by sending a continuous radio signal that emergency rescue teams can use to detect those in need of rescue.

The command center successfully contacted the vessel owner’s wife, who said that her husband and the others onboard were part of a fishing tournament. The vessel was 39 feet long.

The owner of the boat, Glenn Rumer, said that lightning completely destroyed the boat in a direct hit.

“The outrigger that actually got struck exploded into splinters and was on fire when it landed,” he told NBC’s TODAY show. “The motors, the electrical, everything went out. We were completely dead in the water.”

Lt. David McKinley, a Coast Guard pilot, said in a statement that lightning storms are “routinely encountered” in the waters around Florida and “can pose a significant hazard to boaters.”

“Fortunately, the boaters in this case were well prepared with all necessary safety equipment including an EPIRB, flares, and a marine [Very High Frequenc] VHF radio to ensure a quick and efficient rescue.”

Rumer separately told FOX13 Tampa that it was the first time he had used the EPIRB after more than 40 years of experience on the water. “It worked when it was supposed to,” he told the outlet.

The boat has been towed back to shore.