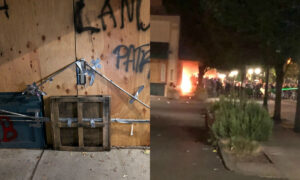 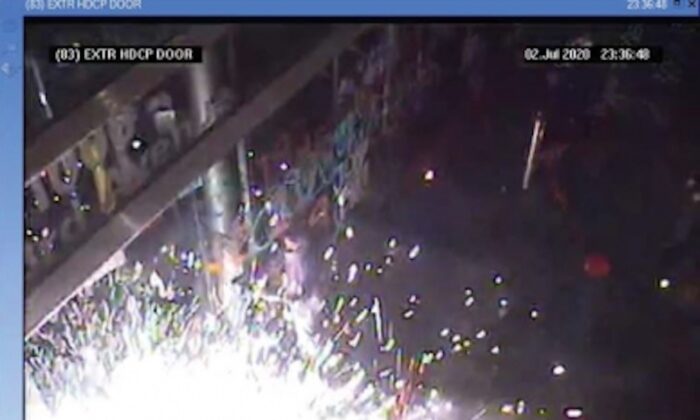 A pyrotechnic mortar explodes in the lobby after a glass door was broken by a rioter—allegedly 19-year-old Rowan Olsen—at the Mark O. Hatfield U.S. Courthouse in Portland, on July 2-3, 2020. (Photo via Department of Justice)
Crime and Incidents

Seven people have been arrested on charges that include assault on law enforcement officers, destruction of federal property, and other disorderly conduct related to riots at the Hatfield Federal Courthouse in Portland, Oregon, U.S. Attorney for the District of Oregon Billy J. Williams announced.

All seven defendants were released pending trial after their first appearances in federal court on July 6.

Amid ongoing protests in Portland since the death of George Floyd in late May, rioters have increasingly targeted federal properties in the city, including the federal courthouse.

“The Hatfield Federal Courthouse has been a repeated target of vandalism, sustaining extensive damage,” the July 7 statement from Williams reads.

Law enforcement officers who have been working to protect the courthouse have been subjected to “threats; aerial fireworks including mortars; high-intensity lasers targeting officers’ eyes; [and] thrown rocks, bottles, and balloons filled with paint from demonstrators while performing their duties,” the statement adds.

Only four of the seven are from the Portland metro area. The seven arrested are Rowan Olsen, 19, of Portland; Shant Singh Ahuja, 28, of Oceanside, California; Andrew Steven Faulkner, 24, of Beaverton, Oregon; Gretchen Margaret Blank, 29, of Seattle; Christopher Fellini, 31, of Portland; Cody Porter, 28, of Portland; and Taimane Jame Teo, 24, of Eugene, Oregon.

Olsen is charged with disorderly conduct, creating a hazard on federal property, and failing to obey a lawful order. On July 2-3, he allegedly used his body to push on and hold a glass door at the Hatfield Courthouse closed, which prevented law enforcement officers from leaving the building, and caused the door to shatter.

“With the door broken, a mortar firework entered the courthouse, detonating near the officers. The officers used shields and their bodies to block the open doorway for approximately six hours until demonstrators dispersed,” the announcement reads.

Olsen was arrested in the early morning hours of July 3.

Ahuja is accused of destroying a security camera mounted on the outside of the courthouse on July 4. Blank is accused of assaulting a federal officer on July 5 with a shield while the officer was trying to arrest another protester.

Faulkner, Fellini, Porter, and Teo are charged with assaulting federal officers with high-intensity lasers on July 5-6; Faulkner also was carrying a sheathed machete at the time of his arrest.

“What we’re seeing in Portland isn’t protesting. It’s criminal behavior being perpetrated by criminals,” Morgan said in a statement on July 6. “They planned, coordinated & armed themselves with weapons intending to destroy federal property and injure law enforcement. Where is local leadership?”

In a statement on July 5, he wrote, “Regardless of your political affiliation or ideological beliefs, there’s no justification for violence & criminal destruction of our historic monuments, statutes, or federal property. We should all unite behind the concept that law & order is a cornerstone of American society.”