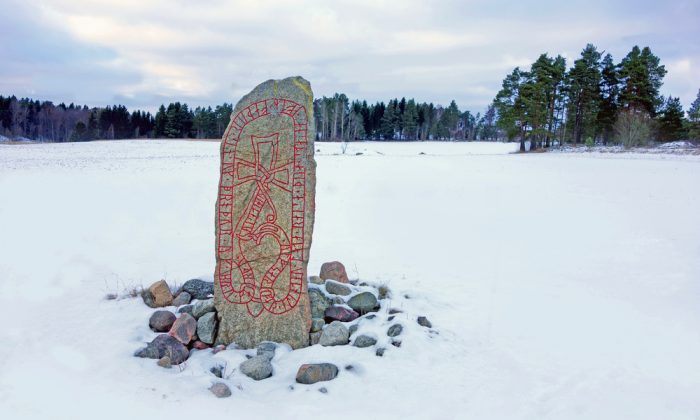 A picture of a runestone standing in a winter landscape. (*Shutterstock)
12- OBSOLETE

A man in eastern Sweden who jumped into chilly water in his underwear to save a duck in distress, becoming a minor YouTube sensation in the process, is our choice for Swede of the Week. … (Read more)

US Embassy joins local efforts to arrest declining honeybee populations by challenging youngsters to solve a case and report it in comic strip style.

A grieving French woman has been granted permission by the French President to marry her former fiancé, who tragically died in 2012, just a month before they were due to wed. The marriage is possible thanks to one of France’s little known laws.

In a few weeks time a heartbroken French woman will stand alone before the mayor of her village for what will be an emotional ceremony, the likes of which are rarely seen. … (Read more)

The rule, one of several new measures for mountaineering in the Himalayan nation, will apply to climbers ascending beyond Everest’s base camp from April onwards, said tourism ministry official Madhusudan Burlakoti.

Climbers scaling Mount Everest will have to bring back eight kilograms (17.6 pounds) of garbage under new rules designed to clean up the world’s highest peak, a Nepalese official said on Monday. … (Read more)

With appeals for asylum in Germany on the rise, one organization of volunteers is doing everything in its power to make refugees feel welcome in their new country, despite the legal hoops and hurdles.

Norwegian scientist helps shine more light on the secrets of the Vikings.

A Viking rune code that had baffled scholars for centuries has finally been cracked, but instead of revealing dark secrets, the inscriptions are mostly lighthearted banter. “Kiss me”, one of them reads. … (Read more)

When Tamil Kavithas Jeyabalan arrived in Chur in the canton of Graubünden from his native Sri Lanka in 1984, he had never seen snow and didn’t speak a word of German. Now, the talented expat carpenter is using his skills to keep the Swiss sledge tradition alive.

Known as “Kavi” by everyone in the area around his workshop in Peist (Arosa), Jeyabalan is a shining example of what foreigners can do in Switzerland. … (Read more)