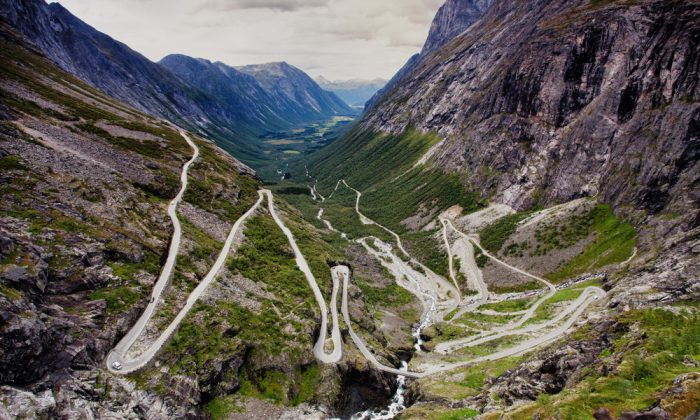 With no relief in sight from the high pollution levels being recorded in northern France, Paris transport authorities have announced that travellers can ride for free starting on Friday and through the weekend due to “health risks”. … (Read and watch more)

A popular Norwegian tourist route has been ranked one of Europe’s five most dangerous roads in a new interactive map of deadly highways across the world.

The Trollstigen, or Trolls’ Path, which winds past the Stigfossen Waterfall, around eleven hairpin bends, and offers breathtaking views of the mountainous terrain in Rauma, western Norway, was given a ‘fear factor’ of five out of ten by the UK company, Driving Experiences. … (Read more)

Russia: Siberian scientists announce they now have a ‘high chance’ to clone the woolly mammoth

Discovery of blood in creature frozen for 43,000 years is seen as major breakthrough by international team. The experts believe they will be able to extract high quality DNA from the remains which have undergone a unique autopsy in Yakutsk, capital of the Sakha Repblic, also called Yakutia. There was palpable excitement among the team which included scientists from Russia, the UK, the USA, Denmark, South Korea and Moldova.

Radik Khayrullin, vice president of the Russian Association of Medical Anthropologists, said in Yakutsk: ‘The data we are about to receive will give us a high chance to clone the mammoth.’ … (Read more)

Italy: Shut Out In Pompeii, Touring The Ruins Of Modern Italy

Pompeii— “Excuse me, I haven’t been here in 35 years,” says the woman. Giovanni, our guide, scratches his head. “… (Read more)

Do you still remember the high-frequency chug of the rotary dial telephone? Or the click and the clack of your old computer keyboard? A Swedish museum has set out to record a huge array of near-extinct sounds before we lose them forever.

A great many sounds were once part of our everyday life, but are now almost gone and forgotten. A curator at the Swedish Museum of Work (Arbetets Museum) in Norrköping came up with the project, and staff will soon start to record near extinct sounds. With EU funding under their wings, they will also work alongside museums in six others European countries. … (Read more)

Like thousands of abandoned villages in Spain, A Barca — with its 12 crumbling stone homes covered in moss and ivy — is seeking a new owner to bring it back to life.

Local officials in Spain’s verdant northwestern region of Galicia hope to give away the hamlet, which is nestled in a hillside overlooking the Mino river near the Portuguese border. … (Read more)

AN Edinburgh Festival show will be heading into space for the first time this summer as part of the UK’s biggest celebration of visual art.

Glasgow artist Katie Paterson will be sending a morse code version of Beethoven’s Moonlight Sonata all the way to the moon and back from the Jupiter Artland sculpture park near Edinburgh Airport. … (Read more)

*Image of Norwegian landscape via Shutterstock.