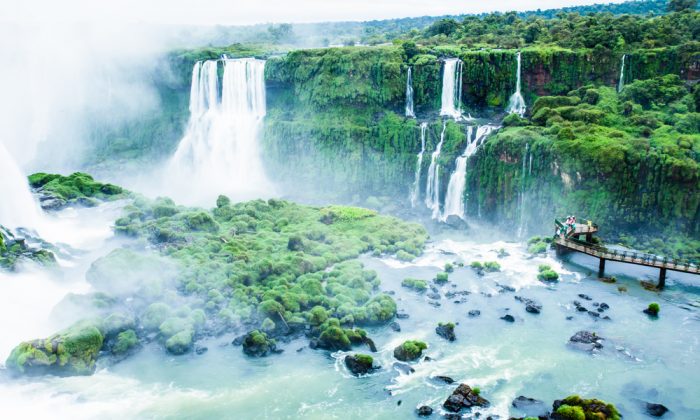 Iguassu Falls, the largest series of waterfalls of the world. (*Shutterstock)
12- OBSOLETE

Tourists were evacuated from the Pont des Arts footbridge in central Paris over the weekend, after more than two metres of railing collapsed, crumbling under the weight of a thousand so-called “love locks”. … (Read more)

It was an emotional time when Nikau Karauti-McMenamin’s cochlear implants were switched on for the first time. “It was an amazing experience,” says proud mother Katie McMenamin, who watched the life-changing moment with partner Fiona McMenamin.
“He placed his hand on my throat while I spoke and went very quiet, but you could tell he was listening while he felt the vibration.

“I think we just said ‘Hi Nikau’. “He also listened to his first song which was John Lennon’s Beautiful Boy.” … (Read more)

Two baby squirrels who survived a cat attack on their nest in Norway have been nursed back to health on a diet of special formula milk. Nina Oppedal, from Gressvik, south of Oslo, found the two squirrels lying abandoned in her garden, their parents nowhere to be seen.

“We had to bring them in and try and save them,” … (Read more)
The Local

When people are isolated from human contact, their mind can do some truly bizarre things, says Michael Bond. Why does this happen?

Sarah Shourd’s mind began to slip after about two months into her incarceration. She heard phantom footsteps and flashing lights, and spent most of her day crouched on all fours, listening through a gap in the door.

That summer, the 32-year-old had been hiking with two friends in the mountains of Iraqi Kurdistan when they were arrested by Iranian troops after straying onto the border with Iran. Accused of spying, they were kept in solitary confinement in Evin prison in Tehran, each in their own tiny cell. She endured almost 10,000 hours with little human contact before she was freed. … (Read more)

The majority of Iguazú National Park tourist trails were re opened today, after a record 43,000 cubic metres of water per second thundering over the waterfalls caused leading officials to restrict access to visitors. … (Read more)
Buenos Aires Herald

Helsinki commuters received and early-morning surprise when they saw an elk running through the city centre during rush hour on Tuesday.

The beast was first spotted at around 3:00 am, according to local police, who spent the early hours trying to catch the animal before the morning traffic hit.

One witness, Matti Murtoniemi, explained that the animal suddenly appeared in front of his car as he was driving through the city’s streets … (Read more)

A man desperate to win a backstage pass for a female artist’s concert was arrested June 10 on suspicion of dumping about 1,000 bags of potato chips in fields and forests in Hyogo Prefecture.

Kazuki Fukumoto, a 25-year-old resident of Akashi in the prefecture, is accused of violating the waste disposal and public cleaning law. … (Read more)