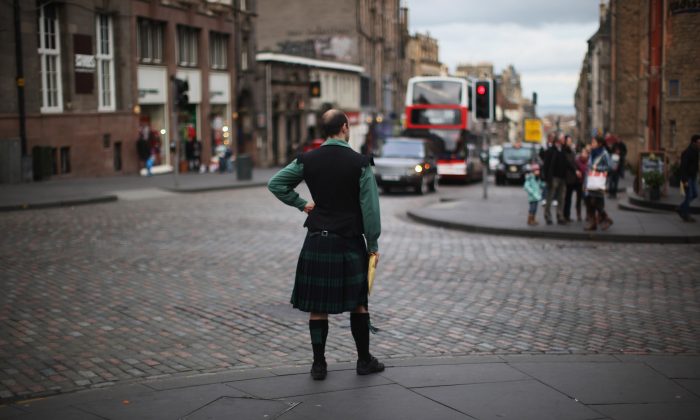 A man dressed in a kilt waits to cross the Royal Mile on February 21, 2012 in Edinburgh, Scotland. A favourite with visitors and one of the busiest streets in the city, the Royal Mile runs from Edinburgh Castle at the top down to Holyrood Palace at the foot. (Jeff J Mitchell/Getty Images)
12- OBSOLETE

Rory Bremner has called for a dash of humour to be injected into the bad-tempered independence debate, saying arguments over the future of Scotland are far too important and far too funny to be left to the politicians.

He said there was huge potential for laughs as the campaigning heats up. “There’s great humour to be had,” the Scottish-born comedian said.

“There’s a lot of big, different characters involved and good arguments, and there are plenty of good Scottish comedians who can have plenty of fun with it. It’s far too dangerous to leave it only to the politically minded.” …

Bad weather has forced back an Australian icebreaker struggling to reach a scientific expedition ship stranded off Antarctica, while snow and winds have prevented a helicopter rescue, authorities said.

The Aurora Australis made it to within 10 nautical miles of the MV Akademik Shokalskiy, which is stuck in an ice field, before retreating in the face of freezing winds and snow showers.

Stockholm’s modern art museum has added more than 200 pieces to its permanent collection in the past year, including oeuvre by Chinese artist Ai Weiwei.

“The new works consolidate Moderna Museet’s position as the Nordic countries’ leading museum for modern and contemporary art,” the institution said in a statement.

“The Moderna Museet Collection is the museum’s backbone,” said director Daniel Birnbaum. “During 2013, the Swedish people’s shared national art treasure was enriched with key artworks by some of the most important artists of our time. Everyone interested in art has cause to be delighted!” …

The facade of the Turkey pavilion at Global Village resembles traditional Safranbolu houses with its Islamic heritage. The ornamental styles and elaborate carvings of the houses lend an elegant touch. The city of Safranbolu takes its name from high-quality saffron cultivated in the area. Used in very small quantities, saffron adds a delicate flavour, distinct aroma and a very unique colour to food in Turkish cuisine. The powder obtained from its flower is also a very strong dye used to colour Turkish carpets. Each region in Turkey has its own history and culture with fascinating archaeological sites. …

Norwegian companies pay too much in tax, Finance Minister Siv Jensen has said, particularly in comparison to neighbouring countries. She now plans to appoint an expert committee to look at how corporation tax can be cut. …

Three men have been arrested after trying to force a tourist in central Rome to pay a street artist after taking a photo of him, Italian media has reported.

The 39-year-old from Piedmont, north-western Italy, was walking down Via dei Fori Imperiali when he was followed by a group of men, Il Tempo reported on Sunday.

The tourist had taken a photograph of one of the many human statues lining the street, which cuts through the Roman forum, and walked on without leaving the customary tip. …

Africa: Egypt One of Most Dangerous Countries for Journalists

Egypt has become one of the deadliest places in the world for journalists, says the New York-based Committee to Protect Journalists (CPJ).

In an annual report on the issue, the CPJ says six journalists were killed for their work in Egypt in 2013.

The report said that “things deteriorated dramatically for journalists in Egypt” during the year, amid “stark political polarization and related street violence …