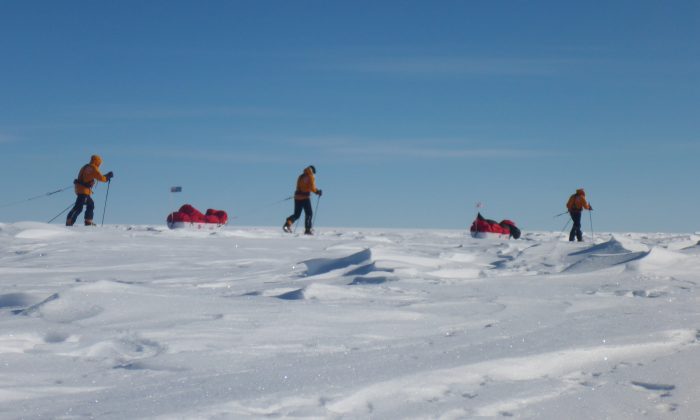 Antarctica by Walking with the Wounded (WWTW) on December 4, 2013. (Photo by Victoria Nicholson/WWTW via Getty Images)
12- OBSOLETE

Ted Scambos, lead scientist at the National Snow and Ice Data Center (NSIDC), and his team found temperatures from minus 92 to minus 94 degrees Celsius (minus 134 to minus 137 degrees Fahrenheit) in a 1,000-kilometer-long swath on the highest section of the East Antarctic ice divide. The National Science Foundation partly funds the NSIDC. …

Swiss banks are scrambling ahead of a December 31st deadline to decide whether to join a US programme aimed at zooming in on lenders that helped Americans dodge taxes.

Around 40 of Switzerland’s some 300 banks have already said publicly they will take part in a US programme set up to allow Swiss financial institutions to avoid US prosecution in exchange for coming clean and possibly paying steep fines. …

KINOKAWA, Wakayama Prefecture–Researchers here have developed a new type of computer mouse for people with disabilities that should perhaps be called a computer “mouth.”

Operable through one’s breath, it enables physically impaired users to move a cursor around a computer screen without their hands. …

Workplace mockumentary series to be set in Brno.

BBC Worldwide has signed a major local production deal with broadcaster Czech Television for a Czech version of The Office. Produced in-house for channel ČT1, the six episode series is due to go into production in January 2014. “I’m extremely flattered and excited that there is about to be a new version of The Office. Prague was the first place in the world to produce a stage version, so I’m very glad a local adaptation is coming to TV too. Cue jokes about Gervais and another fat check,” Ricky Gervais, actor and co-creator of The Office UK, said in a BBC press release. …

Chile: Spreading Christmas cheer to the streets of Santiago

It may be the best day of the year for some, but others are left more alone than ever — here is how you can help share the Christmas spirit.

Christmas in Chile is often a time of rowdy family gatherings, summer barbeques and late night present swapping, but for those living on the streets it can be the lonliest day of the year.

“Christmas is a really hard time for many people who are alone,” Cristian Berrios tells The Santiago Times. “People tend to think of their family — and those who aren’t take a backseat for the day.” …

Tattoo artists in France, who were up in arms about a government ban on certain dyes, say the health ministry has reassured them they will be able to keep using coloured ink, attributing the uproar to a misunderstanding of thousands of pages of regulations.

France’s professional tattoo artists had been protesting for months after the health ministry banned 59 dyes used in cosmetics, including tattoo inks, for safety reasons. …

The Romanian police confiscated Christmas trees, wood and Christmas wreaths with a total value of RON 2.4 million (some EUR 540,000) in the period between November 15 and December 24, according to a statement of the General Inspectorate of the Romanian Police (IGPR). …