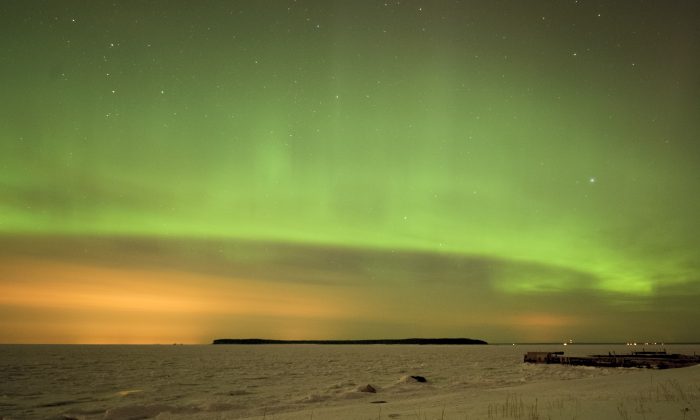 The Aurora Borealis, known as the Northern Lights, might be appearing as far south as Washington state, Colorado Oregon, the Dakotas, the U.K. (Midlands), Germany, New Jersey, Sweden, Norway, Finland, and New York. One can watch a live stream of the event online here. (RAIGO PAJULA/AFP/Getty Images)
12- OBSOLETE

Arranging linen and folding towels may be simple and monotonous tasks for many hoteliers. But for Lee Sang-hyuk, 23, the work is a precious source of confidence and hope for the future.

Lee, a new employee of the Plaza Hotel in the heart of Seoul, is the first regular hotelier with a disability in the country.
He has a mild, third-degree intellectual disability, a level in which social and occupational rehabilitation is possible through education and training. …

Some concerns did exist among a few managers in the beginning, but they were immediately dispelled by Lee’s diligence and ability to quickly adapt, his coworkers said.

His recruitment was part of the fruitful results of Seoul City’s joint project called “the Disabled Transforming into Hoteliers,” with the Korea Employment Agency for the Disabled. …

Since September, German justice officials have been investigating 30 suspected former guards at Auschwitz. But due to various legal obstacles, they may never stand trial.

“We started off with 49 lawsuits, but some of the people live abroad and at least nine of the accused have passed away,” said Kurt Schrimm of Germany’s Central Office of the State Justice Administrations for the Investigation of National Socialist Crimes.

The accused are people who worked as guards in the Auschwitz-Birkenau concentration camps in Poland, thereby contributing to the murder of millions people by the Nazi regime. Prosecutors must now act very quickly if they hope to bring any of the 30 remaining defendants in Germany to justice, as they are all between 87 and 97 years of age.

“I’m convinced that the prosecutors are aiming to wrap up the proceedings as quickly as possible, but it will still take several months,” said Schrimm. …

The schoolgirl was on her way home from Khabarovsk primary school N24 when she fell down an unseen hole in snow. She was pulled out almost 24 hours later thanks to the alertness of a five year old German Shepherd police dog called Rising Star Britney, and her handler Oksana Kudrova.

The accident was on 4 December and her parents only alerted police that evening after their own searches failed to locate her. Police immediately contacted parents and teachers and began a search but there were no signs of the missing girl as temperatures sunk to minus 12C.

‘We know Liza is missing, it is just horrible – she is in one class with my daughter,’ said one mother. ‘I know she was always walking back home on her own. Her parents allowed her to do so’.

Next day’s classes got underway with Liza still missing. …

The Iranian House of Cinema (IHC) plans to establish an art house in Heris, one of the towns that was almost destroyed by an earthquake in East Azarbaijan Province in August 2012.

The architectural design for the Heris Art House was unveiled during a ceremony at the IHC on Tuesday evening.

Jalta Hotel opens its 1950s anti-nuclear bunker and listening post to the public.

f you stayed at Prague’s Jalta Hotel between 1958 and 1989, your room was bugged and your phone was tapped.

Behind its attractive 1950s façade, the hotel has been hiding a secret – there was a 24-hour underground spying operation that listened in on guests.

From an anti-nuclear bunker 20 meters below Wenceslas Square, communist officials monitored the hotel’s foreign guests with a large bank of listening equipment that only a select few ever knew existed. None of the hotel staff were allowed to go into or even talk about the basement. And while communism ended in 1989, the bunker remained in the possession of the Ministry of Defense until 1998, when they finally declassified its existence and turned it over, as is, to the hotel. …

Estonia: Estonian Language Being Crowded Out of Academia by English

While at Latvian and Lithuanian universities only around 20 percent of doctor’s theses are defended in English, the University of Tartu has for sometime been on a different track.

Around 80 percent of doctoral dissertations are in English at the university, leaving the Estonian language as a niche primarily for philologists, reported Postimees.

It is a different story with master’s theses, which are still mostly submitted in Estonian, but here too there are fields of study where English dominates. …

Monbulk appears to be mourning the loss of its “awful” 4m-high wire Christmas tree – with a replacement appearing on the roundabout.

An anonymous local has commemorated the short life of the wire tree by placing a sad-looking, potted, 30cm tree atop a pile of rubble, adorned with not much more than a single gold star.

All that had previously remained of the wire tree was a sad light pole graffitied with a crucifix and the message “RIP Xmas tree”. …