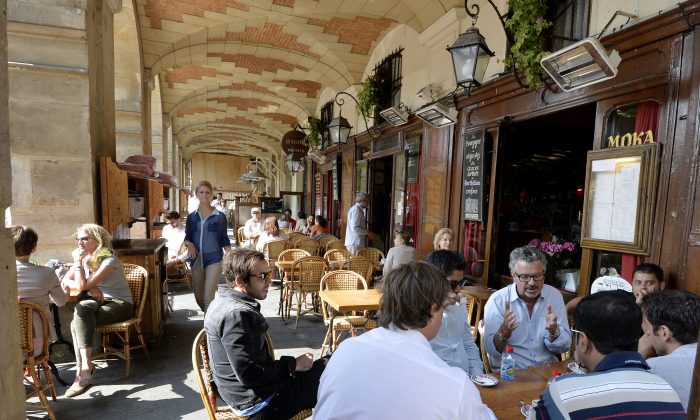 A photo taken on July 12, 2013 shows people on the terrace of a cafe on the Place des Vosges square in the Marais district in the 3rd and 4th arrondissements of Paris. (MIGUEL MEDINA/AFP/Getty Images)
12- OBSOLETE

Last week’s winter storm appears to have taken its toll on the German island of Helgoland, where nearly 50 seal pups have since been reported missing. Officials there say they probably didn’t survive.

Barrie photographer Don Komarechka sees the world differently after he takes a picture of it.

“Snowflakes are the perfect example of that. If you look outside, how many trillions of snowflakes will you see falling? Most people will just grumble because you’ve got to shovel them off your driveway or wipe them off your car.

“But if you look at one single crystal on its own, it has an immense beauty,” Komarechka, 27, told the Star as he was packing up copies of his self-published book Sky Crystals to ship out from his home in Barrie. …

Wales: Rise in women over 40 having children in Wales increases number of complex births

A 64% increase in women over 40 having babies has led to a rise in the number of more complex birth to be dealt with by midwives.

Wales has seen a dramatic rise in the number of women over the age of 40 giving birth, according to a new report.

The Royal College of Midwives’ (RCM) State of Maternity Services report, published today, shows that between 2001-2011, there was a 64% rise in older mothers in Wales.

The College said that the increasing trend midwives were grappling with more complex births, as older age can increase the health risks to both women and their babies.

The owners of a café in the south of France have struck a blow for good old-fashioned French politeness, with a sign charging extra for customers who forget their manners while ordering their coffee.

The French are well-known for their love of everyday formalities. While much of the Western world can sometimes seem to get through the day with grunts and nods, the French insist on sprinkling their exchanges with a “Madame” here and a “C’est trop gentil” there.

Baguette purchases must be preceded by a mandatory “Bonjour”, and it’s de rigeur to wish complete strangers a good afternoon, even when leaving an elevator.

So what happens if these standards drop, as can happen from time to time? …

Twenty kilometers past the residential neighborhood of Barra da Tijuca, is Praia de Grumari, a rustic beach located in an environmentally protected area.

Away from the crowded Zona Sul (South Zone) beaches of Copacabana and Ipanema, further down the coast and 20km past the residential neighborhood of Barra da Tijuca, is Praia de Grumari (Grumari Beach), a rustic beach located in an environmentally protected area surrounded by cliffs and a national park.

Almost isolated, the winding narrow road that leads to Grumari from Recreio dos Bandeirantes first brings you to Prainha, or little beach, where strong waves attract some of the best surfers in the region.

“My father brought me surfing here since I was a child and every beach that I’ve surfed in Rio doesn’t compare,” says local surfer João Lullo. …

Ireland: Selfie, word of 2013, sums up our age of narcissism

It is quite an art, the selfie. A YouTube tutorial on the subject with 1.5 million hits advises would-be smartphone self-portraitists to hold their necks out, duck-like, angle their heads and lift the camera above their heads for that “baby-face look”.

Selfies – self-portraits taken on smartphones and uploaded to social media – were recently declared the Oxford English Dictionary’s “word of 2013”, after its use shot up 17,000 per cent from last year. …

Speakers at a programme here on Wednesday said that it will be difficult to safeguard human rights unless transition is ended in the country.

Speakers of an interaction on ‘Human rights situation in changing context,’ organised jointly by Human Rights Safeguard Network Dhanusha and Nepal Bar Association Dhanusha to mark the human rights day, they expressed worries over increasing human rights violations even if there was democracy in the country.

Officiating Chief Judge of the Appellate Court Janakpur Tej Bahadur KC, called on all to be united for improving the human rights situation. …