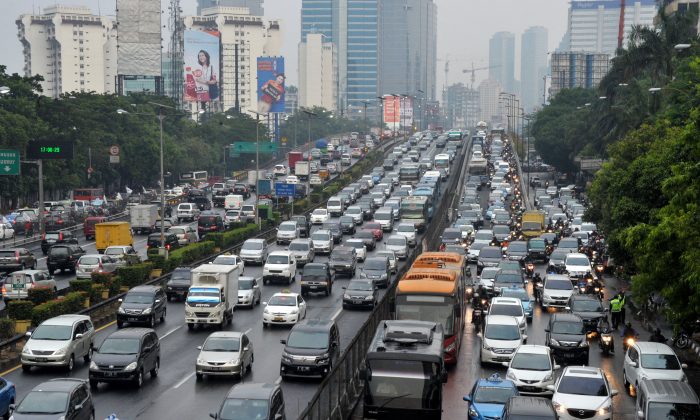 This picture taken on October 22, 2013 shows motorists trapped in the rush hour gridlock in Jakarta. Fed up with spending hours stuck in the gridlocked Indonesian capital Jakarta.(BAY ISMOYO/AFP/Getty Images)
12- OBSOLETE

Swedish fashion giant H&M said on Monday that it would consider raising retail prices in order to pay better wages to some of the world’s poorest textile workers.

The announcement came at a meeting with pressure groups in Stockholm where H&M unveiled plans to improve pay rates for textile workers in countries such as Bangladesh where the minimum wage is less than $70 a month.

Helena Helmersson, head of sustainability at H&M, told AFP that higher retail prices “might be a possibility” in the long term but that customers should not expect any price hikes in the near future.

Some corporate watchdogs saw the acknowledgement as a significant breakthrough. …

Glenn Perry breaks the world record to draw media attention to the plight of the victims of the recent typhoon in the Philippines.

After hours of singing and strumming his guitar continuously, Dubai-based Portuguese musician Glenn Perry’s fingers cut through the steel strings and his throat began to swell with excruciating pain. The singer-philanthropist completed a 25-hour singathon, where he sang, played the guitar, and piano continuously, without food, water, sleep, and a few bathroom breaks late on Friday evening. …

The traditional Venezuelan festival was added to the Intangible Heritage list during the 8th session of the Intergovernmental Committee for the Safeguarding of Intangible Heritage this week. According to UNESCO, the list “serves to raise awareness of intangible heritage and provide recognition to communities’ traditions and know-how that reflect their cultural diversity”. 10 other cultural “elements” from all over the world; ranging from ger (moveable Mongolian house) craftsmanship to Turkish coffee culture were also recognised during the meeting in Baku, Azerbaijan. …

Kazachstan: New gold refinery to be launched in Astana

“The official launch is December 10. President Nazarbayyev will be among those in attendance”, Mr. Tleuzhanov said.
In the first two years all the gold to be produced will be sold exclusively to the National Bank of Kazakhstan. Later the facility may start producing jewelries. The production capacities can be brought up to 70-75 tons. The investments are estimated at $30 million.

For the products to comply with the Good Delivery specification [developed by London Bullion Market Association (LBMA)], the facility is to produce at least 10 tons of gold a year for three years on end. …

The footage, taken by cameras fitted to machine guns on the main wings of U.S. aircraft, is about five minutes long. It shows air raids on about 10 locations in Kyushu, including Japanese military installations and munitions factories during the closing months of World War II. …

Jakarta: For Jakarta drivers, there will never be enough road

A transportation expert from the University of Indonesia has said that there would never be enough streets in Jakarta to handle all the vehicles inside the city, much less other vehicles coming from its surrounding suburbs.

“The expansion of the city’s roads will never keep up with the growth in the number of vehicles. [The road construction] therefore, will never finish, [even if we wait] until the end of the world,” said Sigit Pranowo Hadiwardoyo, 55, in a recent interview. …

Finland: Looking for new niches in the apps market

A growing number of Finnish companies are aiming to enter the mobile apps market with products other than games, such as smartphone and tablet applications focused on health and on education.

Some companies are already making headway in efforts to step outside the mobile games sector. One is the small, Helsinki-based early stage technology start-up Sumoing – a company where a six-person team undertook development of a mobile photo editing app last year. The app was launched in March and so far has had over 9 million downloads. …