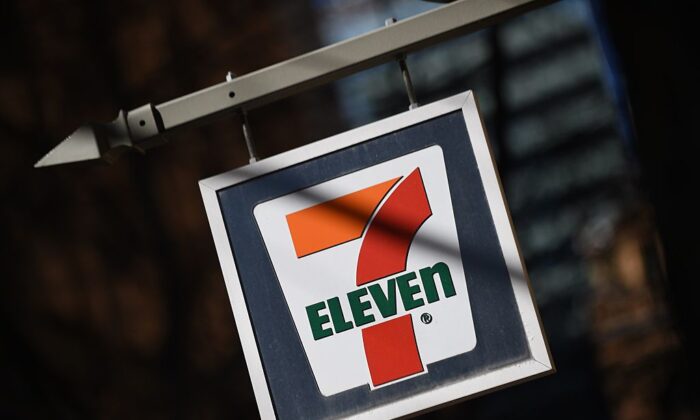 A sign hangs outside a 7-Eleven convenience store in Sydney on September 1, 2015. (Peter Parks/AFP via Getty Images)
Australia

Australians are about to pay more for their favourite 7-Elevens coffee and slurpees for the first time in more than a decade amid spiralling inflation.

The multinational retail company, which has over 700 convenience stores across Australia, announced on Monday that from Oct. 4, the price of a regular cup of coffee would jump from A$1 (69 cents) to A$2, a large coffee will increase to $3 and super cups will rise to $3.50.

Meanwhile, a large slurpee will cost A$1.50, along with Iced Coffee and Hot Chockee.

Customers who bring their own reusable cups will get a discount of 50 cents as part of a broader effort to reduce single-use cups. The company said that 7-Eleven sells more than 80 million cups of coffee per year, with the majority of them ending up in landfill.

The price hike is the first in 13 years, with the retail giant calling it a result of “sustained cost increases across the board which have made the existing prices unsustainable.”

CEO and Managing Director of 7-Eleven, Angus McKay, noted in a statement that “it is no longer possible to absorb cost increases as we have done for the past decade.”

“We will continue to provide our customers with great value and great quality while ensuring our prices are sustainable for our store owners, our suppliers and our communities.”

However, McKay said that despite the hit to the hip, a single A$2 gold coin for regular coffee “remains among the best value offers in the industry.”

“By comparison, it’s not uncommon to see a regular coffee cost between $4.50-$5.50.  If a customer was to buy a regular coffee every day of the year from 7-Eleven, instead of paying $4 or more elsewhere, they’d still save more than $730 per year,” the company said in a media release.

The popular item has become the latest victim of Australia’s rising inflation, which has seen food, goods and petrol becoming increasingly unaffordable.

The annual inflation rate has hit 6.1 percent—the highest in decades—according to the Australian Bureau of Statistics figures.

In the June quarter, the price of goods continued to rise by 2.6 percent which was more strongly than that of services, which rose 0.6 per cent. The main contributors to the rise in food prices include vegetables, which rose 7.6 percent in price, and fruit, which rose 3.7 percent. Meanwhile, furniture prices rose seven percent due to increased transport and material costs and stock shortages.

Head of Prices Statistics at the ABS, Michelle Marquardt, said that annual goods inflation “was the highest since 1987, as the impacts of supply disruptions, rising shipping costs and other global and domestic inflationary factors flowed through the economy.”

Consumer group CHOICE revealed in its latest consumer pulse survey that 83 percent of Australian households are concerned about the cost of food and groceries, an 19 percent increase in the past year alone.