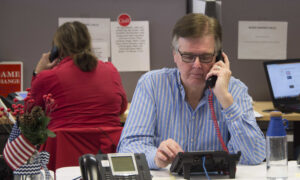 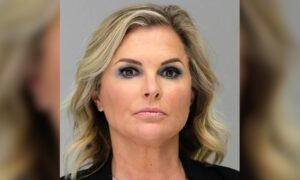 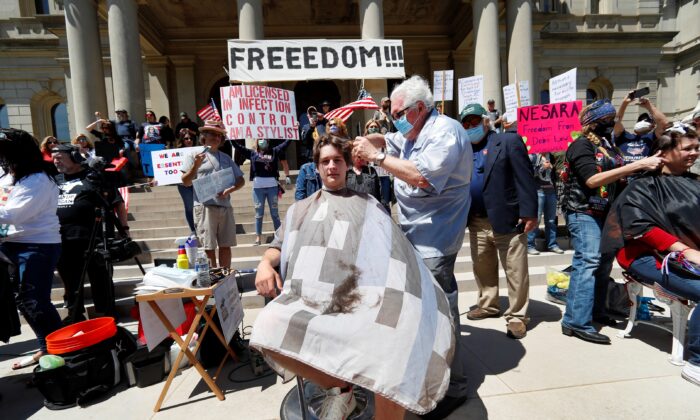 The media record barber Karl Manke, of Owosso, giving a free haircut to Parker Shonts on the steps of the State Capitol during a rally in Lansing, Mich., on May 20, 2020. (Paul Sancya/AP Photo)
US

LANSING, Mich.—Police ticketed seven people for cutting hair during a protest outside the Michigan Capitol, where about a dozen barbers and hair stylists defied stay-at-home orders to give free hair cuts on May 20.

At one point, about 300 people attended the demonstration that was organized by the Michigan Conservative Coalition to oppose the measures imposed by Gov. Gretchen Whitmer to curb the spread of the CCP virus. More than 5,000 residents have died from COVID-19 complications in the state.

Seven barbers or hairdressers were cited for disorderly conduct—engaging in an illegal occupation or business—after being warned by state police. The cases were referred to the state attorney general. The penalty is a misdemeanor punishable by up to 90 days in jail, a $500 fine, or both.

Whitmer’s stay-home order requires the closure of nonessential businesses and places of public accommodation such as salons.

Angela Rigas, of Caledonia in western Michigan, said she was ticketed after refusing three times to stop cutting hair.

“We’re all here for the same reason today—to show the governor that our rights do not come from her and that we need to open Michigan. People need to get back to work,” she said.

One hairdresser draped patrons in an American flag cape. Organizers urged the crowd to contribute to a GoFundMe page to help cover fines and legal costs for the barbers. Attendees, many not wearing masks or keeping 6 feet apart, jeered troopers when they issued warnings or tickets.

“I will not stand down,” said Karl Manke, a 77-year-old barber who cut hair at the demonstration. His license was suspended by regulators last week after he reopened his shop in Owosso.

Whitmer, whose handling of the pandemic has been supported in public polling, is gradually lifting restrictions so more business sectors can partly or fully reopen. The stay-at-home order is in effect at least through May 28. She said this week it is very unlikely that salons and barbershops will be allowed to reopen next week, saying people cannot socially distance for a haircut.

During a visit to Midland to address flooding that has forced thousands to evacuate, Whitmer told reporters Wednesday that she understands the protesters’ frustration.

“But the more people moving about and flouting the law, the harder it’s going to be turn the dial and take the next step. … In the midst of a global pandemic, what I ask is that people do so in a way that does not expose themselves or others to a prolonged public health crisis,” she said.