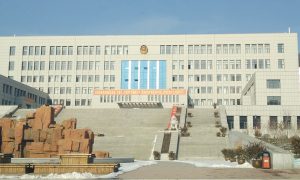 Police said seven people were shot during a birthday party for a toddler in Prince George County on Saturday night, with the suspect still at-large.

Prince George’s County Police said in a statement that officers were called to the 6200 block of Maxwell Drive in Camp Springs at around 9:00 pm on Aug. 24. in response to a reported shooting.

“Once on scene officers found 7 people shot and began lifesaving techniques,” police said, adding that “3 people are listed as critical while 4 are stable.”

Police Chief Hank Stawinski said at a press conference that around 12 people were at a 2-year-old’s birthday party when an individual fired shots into the gathering.

Stawinski was cited by ABC as saying that the suspect reportedly exchanged words during an altercation at the event before firing shots.

#BREAKING: @PGPDNews confirms at least 7 people shot at “gathering” on the 6200 block of Maxwell Drive around 9pm.

At least one had to be taken to hospital by helicopter.

The chief said all seven victims are between the ages of 18 and 20 and they’re all expected to survive.

PIO is on scene of a shooting in the 6200 block of Maxwell Dr. in Camp Springs. pic.twitter.com/uPECfNv9wq

The chief didn’t release information about the suspect, who is still at large.

UPDATE: The mass shooting happened at a 2 year old’s birthday party. 7 people were shot and injured after a dispute broke out and at least one gunman opened fire. Police Chief: “If you get caught with an illegal gun in PG County, you gotta go to jail. This has gotta end.” https://t.co/LU1Yie2bIf

The total number of emergency department visits for unintentional injuries in the United States in 2017 was 29.2 million, according to the CDC.