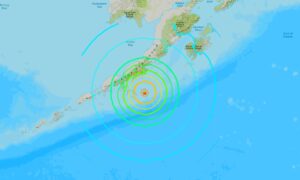 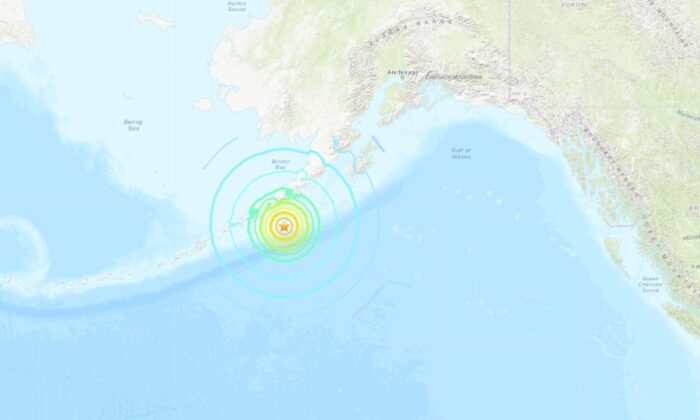 A 7.5 magnitude earthquake struck off the coast of Alaska, triggering a tsunami along the coast of the state. (USGS)
US News

A 7.5 magnitude earthquake struck off the coast of Alaska, triggering a tsunami warning along the coast of the state.

The earthquake hit about 62 miles southeast of Sand Point at 12:54 p.m. local time, according to the U.S. Geological Survey (USGS). The area is about 575 miles southwest of Alaska’s largest city, Anchorage.

There were no initial reports of damage or injuries.

A tsunami warning was issued for areas along the Alaska Peninsula coastline, said the U.S. Tsunami Warning Center.

A recent message from the center said that a tsunami warning remains in effect around south Alaska and the Alaska Peninsula, including the “Pacific coasts from Kennedy Entrance, Alaska (40 miles SW of Homer) to Unimak Pass, Alaska (80 miles NE of Unalaska).”

Several buoys are in #tsunami mode (blinking) off the coast of Alaska following the M 7.5 #earthquake pic.twitter.com/7ptBBvRL0m

Several other earthquakes were reported around where the tremor struck with magnitudes of 5.0 and 5.2, said the USGS.

King Cove city administrator Gary Hennigh told the Anchorage Daily News that the quake was felt in the peninsula, while the report noted that tsunami warning sirens were going off in Kodiak.

“Residents and cannery workers are evacuating to higher ground until we know more about the tsunami warning,” Hennigh said.

Magnitude 7.5 #earthquake near Sand Point, AK. Here’s the water displacement at buoy 46403 south of Sand Point after the quake occurred. #Tsunami warning continue for parts of the Alaskan coast. pic.twitter.com/LyZiNv3K9n

A 7.1 magnitude earthquake struck near Anchorage in late 2018, triggering widespread damage and causing numerous injuries. Officials said about 80 aftershocks were reported in the quake’s aftermath.