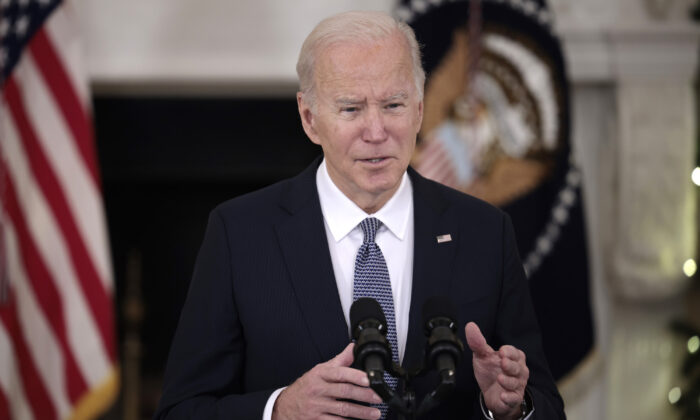 President Joe Biden gestures as he speaks at a press briefing at the White House on Dec. 3, 2021. (Anna Moneymaker/Getty Images)
By Tom Ozimek

The U.S. Court of Appeals for the 6th Circuit has denied the federal government’s motion to transfer the lawsuit challenging the Occupational Safety and Health Administration’s (OSHA) COVID-19 vaccine-or-test requirement to a different court, while also rejecting a White House bid to dissolve a stay on the mandate, delivering a blow to the Biden administration’s efforts to press ahead with implementation.

In a Dec. 3 ruling, the 6th Circuit Court denied the government’s motion to transfer the case to the 5th Circuit and the D.C. Circuit, while also rejecting as “moot” the Biden administration’s attempt to overturn a hold on the mandate.

OSHA on Nov. 5 published an Emergency Temporary Standard (ETS) that would require private employers with 100 or more employees to impose a mandatory vaccinate-or-test policy. Under the rule, unvaccinated workers also would have to wear masks inside the workplace, with violators facing potential penalties of thousands or even tens of thousands of dollars per incident.

When the OSHA rule was published, it triggered a torrent of lawsuits from Republican-led states, individuals, and businesses.

On Nov. 12, the 5th Circuit granted a motion to stay the ETS and ordered that OSHA “take no steps to implement or enforce” it until further court order, prompting OSHA to announce it had suspended implementation pending litigation.

Several legal challenges to the OSHA rule were later rolled into one, and the Ohio-based 6th Circuit Court—of which 11 of 16 judges are Republican appointees—was selected via lottery to hear the consolidated lawsuits.

The Biden administration then filed a motion on Nov. 23 to lift the 5th Circuit’s stay on the mandate and get the case moved to a potentially more favorable court.

Rob Natelson, a former constitutional law professor, wrote in a recent op-ed for The Epoch Times that it’s likely the legal challenge to the OSHA rule will end up before the Supreme Court.

Natelson said the high court will likely weigh several issues relating to the ETS, including whether the mandate exceeds the powers the Constitution grants to the federal government, whether OSHA exceeded its authority under its statute, and if the vaccine-or-test requirement denies individuals due process of law.

The 5th Circuit ruling described the OSHA rule as “fatally flawed” and said that the mandate would likely be declared unconstitutional.

In its Nov. 23 filing, the Biden administration argued that the 5th Circuit panel erroneously interpreted the OSHA mandate, saying that “the speculative compliance costs and similar harms asserted by regulated parties cannot overcome the extraordinary harms to the public interest detailed above.”

“Simply put, delaying the standard would likely cost many lives per day, in addition to large numbers of hospitalizations, other serious health effects, and tremendous expenses,” White House lawyers alleged in the filing. “That is a confluence of harms of the highest order.”

White House officials didn’t respond to a request by The Epoch Times for comment by press time.