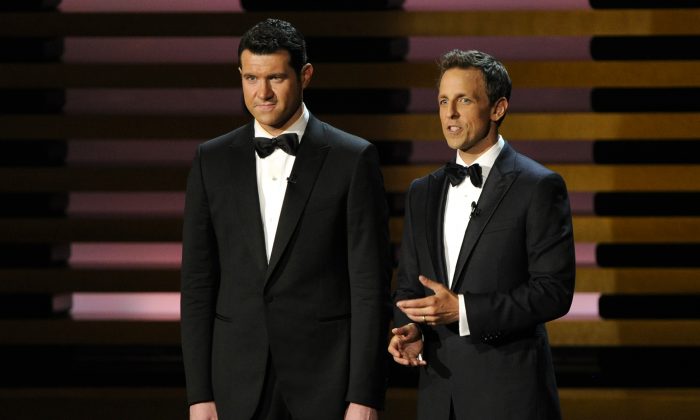 This year’s Emmys, hosted by former SNL writer Seth Meyers, didn’t disappoint. Although he previously admitted to being a little nervous about his opening speech, saying that the first joke is the most stressful, he made everyone laugh with his monologue about how Television is like the easygoing, low maintenance girlfriend while movies are like the expensive, demanding relationship that requires you to spend $40 on soda.

Jimmy Kimmel used all his time on stage to pick on Matthew McConaughey and accused him of being too good looking for TV, and for getting nominated for too many awards. Kimmel suggested that McConaughey stick to movies.

McConaughey picked up an Oscar for “Dallas Buyers Club” earlier this year and was nominated for an Emmy for his role in the crime drama “True Detective.” Although he didn’t get the Emmy, when McConaughey came up on stage to present with Woody Harrelson, he made it clear that you should be grateful for what you have and not be jealous of others’ success.

The funniest skit was done nicely by Meyers and Billy Eichner who went around asking New Yorkers simple trivia questions about this year’s Emmy Awards. The lack of excitement and knowledge about the Emmys among the passersby was more than hilarious, it was painfully honest, especially since Eichner was paying $1 to those who answered a question correctly.

The strangest part of the awards ceremony was Weird Al Yankovic’s singing performance where he managed to mention all of the big TV shows. He then pleaded that George R. R. Martin types faster because “Game of Thrones” needs more scripts. Then, Andy Samberg who dressed up as Geoffrey, brought a typewriter to Martin who sat in the audience and then pretend-typed.

The most awkward moment was Bryan Cranston violently running up to Julia Louis-Dreyfus while she was walking to the stage to get her award and kissed her really hard, on the lips. Louis-Dreyfus then reminded everyone that Cranston played a dentist on “Seinfeld” and they had a similar scene on the show.

And of course the moment everyone was on the lookout for was the emotional and very personal Billy Crystal tribute to the late Robin Williams, which made the entire room of celebrities fall silent.

“He made us laugh big time… he was the greatest friend you could ever imagine… it’s very hard to talk about him in the past because he was always so present,” Crystal said. “Robin Williams, what a concept…” he said.

Here is a list of the night’s winners of all the major categories:

Outstanding Lead Actress In A Miniseries Or A Movie — Jessica Lange

Outstanding Lead Actor In A Miniseries Or A Movie — Benedict Cumberbatch

Outstanding Writing for a Miniseries, Movie or a Dramatic Special — “Sherlock: His Last Vow” (Masterpiece)

Outstanding Directing For A Miniseries, Movie Or A Dramatic Special — “Fargo”

Outstanding Choreography — “So You Think You Can Dance”

Outstanding Host For A Reality Or Reality-Competition Program — Jane Lynch

Outstanding Writing For A Variety Series — “The Colbert Report”

Pentagon Withdraws 120 US Troops From Israel
0