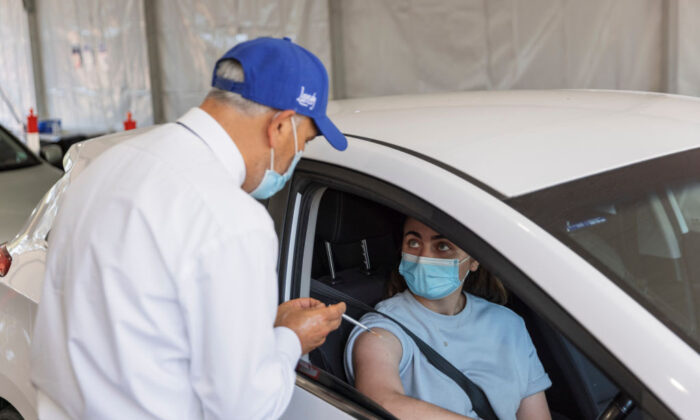 Update: This article has been updated to include the latest petition figures.

Over 100,000 Australians have signed a petition to the federal Parliament calling for the nation’s drug body, the Therapeutic Goods Administration (TGA), to release documentation supporting its decision to approve the use of COVID-19 vaccines.

The petition, “Immediately release all TGA submission documents for publicly funded vaccines,” which is due to close on Sept. 22, and was signed by 102,614 individuals.

“The Australian public has so far funded COVID vaccine manufacturers to the tune of $5 billion, and this may rise,” the petition read. “At the same time, the government is attempting to mandate these novel therapies on the public using public health orders, the media, and calls for ‘mandatory vaccination.’”

“It is now time that the right of the public to inspect any documents for vaccines that are funded by them is restored. The TGA must no longer be the sole arbiter of what documents should be considered confidential if the public is paying pharma companies for their products.

The petition was launched by Tony Nikolic, the principal of Sydney-based law firm Ashley, Francina, Leonard (AFL) and Associates, who have filed legal action against the New South Wales (NSW) and Australian federal governments, calling for public health orders to be declared unconstitutional and illegal.

“It is our view that vaccine compulsion strips citizens of their basic human rights, including their right to work, their right to bodily integrity and their right to informed consent to medical treatment without coercion,” a press release from AFL said.

The news of the petition comes as Australian state and federal governments have pointed to high vaccination rates as the key benchmark for the country to move away from COVID-19 lockdowns and health restrictions to contain the spread of COVID-19.

All states and territories are currently in the first stage, Phase A, which is to get more of the population vaccinated. Once 70 percent of the population is vaccinated, Phase B is triggered, where restrictions such as stay-at-home orders will largely be removed.

Phase C is reached once 80 percent of a jurisdiction’s population is vaccinated. At this point, international travel is supposed to open.

State and federal governments have differed in their implementation of the plan, with NSW offering certain “freedoms” to fully vaccinated individuals once 70 percent of the population has received two doses of the vaccine.

Meanwhile, Victoria will begin easing restrictions around outdoor sports recreation (which are not restricted in NSW) once 80 percent of the population has received one dose of the vaccine. At the 70 percent double-dose benchmark, hair salons, pubs, clubs, and weddings will be open—but only for fully vaccinated individuals and with limitations.

Frustrations with strict health restrictions have begun boiling over with increasing protest activity and petitions against government-mandated regulations, vaccine mandates, and passports.

One in four Australians also reported knowing someone who had committed suicide in the past 12 months, according to figures from Suicide Prevention Australia, whose CEO Nieves Murray said increases in suicide occurred during periods of significant social and economic upheaval.

Meanwhile, on Sept. 18, Australians across major cities voiced their dissent against government-mandated COVID-19 measures, with thousands of protesters in the cities of Melbourne, Brisbane, Perth, and Adelaide, taking to the streets in “Freedom Rally” demonstrations.