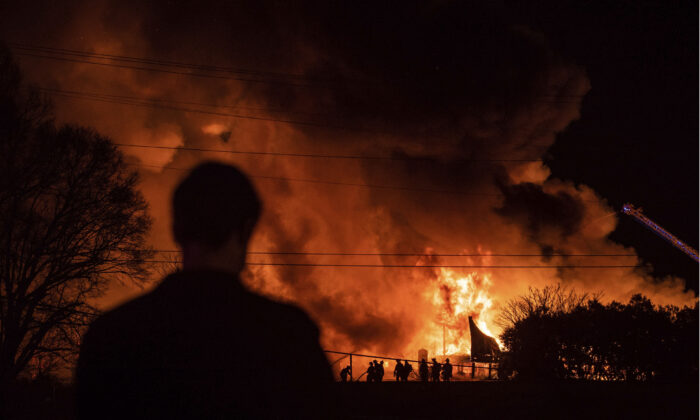 By Mark Price
From The Charlotte Observer

CHARLOTTE, N.C.—The city of Winston-Salem is working to evacuate 6,500 people as fears grow a smoldering fertilizer plant might explode near thousands of homes.

Fire trucks patrolled the mandatory evacuation area early Tuesday, blowing their horns and loudspeakers blasting a warning for people to evacuate as quickly as possible.

The mass exodus is due to a potentially explosive fire at the Weaver Fertilizer Co. in north Winston-Salem.

Just under 2,500 homes are within a mile of the plant, which stores tons of explosive materials as part of its products, the city said in a tweet.

Residents being are told to plan on being out of their homes for at least 48 hours, and roadblocks have been established around the area. A “reverse 911 call” went out at 6 a.m. Tuesday, to reach those who hadn’t yet left their homes.

The Education Building at the community’s fairgrounds has been opened as an emergency shelter, officials said.

“Don’t wait for something to happen. Something has happened. Now is the time to get out,” Winston-Salem Fire Chief Trey Mayo wrote in a tweet just after midnight.

City officials are also warning people in the city as a whole to “avoid strenuous activities outdoors” due to the toxic air. People with asthma, chronic obstructive pulmonary disease and respiratory illnesses were advised to stay indoors.

Weaver Fertilizer released a recorded statement Tuesday, reporting “there have been no injuries or loss of life to any employees, first responders or citizens.” Plant officials also pledged “to participate fully in the investigation into the cause of the fire.”

The plant is known to include large quantities of volatile ammonium nitrate in its products, which prompted fire crews to pull back after 90 minutes, officials said on Facebook. One unmanned ladder truck has been hooked to a fire hydrant at the site, and it continues to spray water on a rail car that could potentially explode.

Emergency responders will not likely return to the plant site until late Wednesday, officials said at a news conference.

Firefighters were called to the site about 6:45 p.m. Monday after someone reported a fire at the loading dock. They arrived to find “heavy fire and involvement in the building,” Mayo said in a video posted to Facebook.

“Subsequently the entire building has become consumed by fire and has collapsed in,” he said.

Such an explosion happened in 2013, he said, when chemicals at a Texas fertilizer plant ignited, killing 15 and destroying 120 homes, according to a report in the Fort Worth Star Telegram.

Winston-Salem Communications Director Ed McNeal warned the potential for an explosion “is not hyperbole.”

A drone flying over the flaming building has already confirmed “small explosions” have happened at the site, he said.

Wake Forest University announced it was canceling classes Tuesday and is opening up three campus sites to shelter students who are evacuated from their housing due to the fire.

“The evacuation area does not include on-campus housing, with the exception of Deacon Place, which is within the one-mile evacuation radius,” the university said.

The one-mile evacuation area is considered a “worst case scenario” of what would be impacted should an explosion occur, officials said.