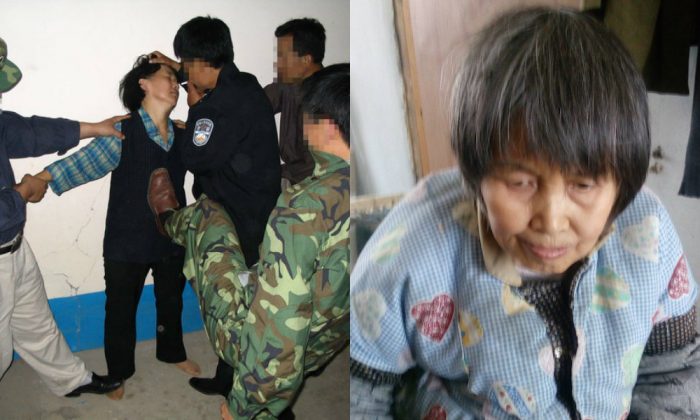 An elderly woman from China recently recounted the brutal torture she suffered during her seven-year incarceration for practicing a peaceful spiritual discipline that the Chinese Communist Party has been suppressing for nearly 17 years.

Liu Xia, 63, a retired middle school teacher from Panshi City in China’s northeastern province of Jilin, was so badly abused in prison that she shrunk 6 inches, lost 44 pounds, and has difficulty walking, according to a report on Minghui.org, a clearinghouse for news and information about the persecution of Falun Gong in China.

The specific pretext for the arrest of Liu is not clear. She is, however, a practitioner of Falun Gong, a traditional self-cultivation practice of exercises and moral teachings. Falun Gong has been persecuted in China since 1999, on the orders of Jiang Zemin, the former Communist Party leader, after he felt threatened by the practice’s popularity. The Chinese regime estimated that about 70 million Chinese citizens from all walks of life were Falun Gong adherents before the persecution.

Liu’s ordeal began on July 10, 2008. Local policemen arrested her and demanded that she give them names of other Falun Gong practitioners in the area. They assaulted Liu and shocked her with electric batons for over 30 hours after she refused to cooperate with them.

On Sept. 28, 2009, Liu Xia was taken to Heizuizi Women’s Prison to begin a seven-year jail sentence. In prison, Liu was subjected to brainwashing sessions, beaten, shocked with electric batons, deprived of sleep, and placed in solitary confinement.

The worst torture was meted out between Dec. 28, 2010 and Jan. 11, 2011. First, Liu was beaten and abused by three of her fellow inmates in a solitary room. According to Minghui, a prison inmate named Han Lijie told Liu: “It’s useless to cry. If you die, we’ll just report that you died from natural causes …”

Two days later, Liu was subjected to a “stretching bed torture”: Prison inmates used bedsheets to tie Liu’s four limbs to four bedposts, leaving her body suspended in mid-air. They then placed heavy objects on her stomach and beat her arms and legs every 10 minutes.

After several days of punishing beatings, Liu Xia was made to write a statement promising that she wouldn’t practice Falun Gong. After she refused, she was stripped and tied to a table in a room, where she was left to freeze.

The abuse that left Liu crippled was meted out on Jan. 12. For long stretches over 40 days, Liu was forced to sit on a torture device known as a “small stool,” and had her hands tied above her head and her feet propped up. Various heavy objects were later placed on Liu’s legs to further her torment.

According to Liu’s account on Minghui: “The torture damaged my nervous system, and my ribs were broken. I became disabled and could not keep my back straight. I shrank more than 15 centimeters (6 inches) in height and lost 20 to 25 kilograms (44 to 55 pounds).”

When Liu Xia was released on July 10, 2015, she couldn’t stand up straight, couldn’t walk properly, and couldn’t lift a spoon with her hands. She also found that her husband had been forced to divorce her, and her son had gone missing after he couldn’t bear “social and family pressure.” Liu is currently staying with her younger brother because she is homeless.

Liu says that she’s lucky she left prison alive. Two other female Falun Gong practitioners who were incarcerated with her suffered far worse fates: Chen Shuqin was killed in custody on April 30, 2012, and He Hua was tortured to the point of insanity, Liu says.

Guo Xia, a prison guard that Minghui describes as particularly sadistic, informed the Falun Gong practitioners in Heizuizi Women’s Prison that she didn’t care if they died or went insane as long as her perfect record—of forcing practitioners to abandon their beliefs—remained unblemished.