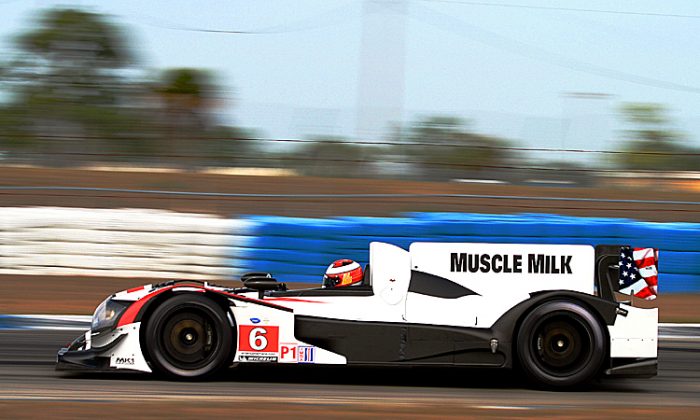 There has been a 12-hour endurance race at Sebring since 1952; for 60 years international sports car teams have contested for the win around this collection of World War II runways. The biggest teams and the best drivers in the sport’s history have raced here; any list of the biggest names among them would either be too long to fit or leave out too many important names; suffice to say, just about every notable sports car team, car, and driver of the past 60 years has competed in the Sebring 12 Hours.

Sebring’s rough concrete runways, connected by sections of old and new asphalt provide some of the toughest tests of any track in the world; 12 hours at Sebring is like 24 anywhere else. Mastering the challenge of Sebring means something in the racing world.

The 2012 event, the 60th anniversary of this great race, promises to be one of the biggest and the best. Not only is it the opening race of the American Le Mans Series season, attracting the best sports car teams of North America; it is also the first race for the new FIA/ACO World Endurance Championship, bringing teams from around the globe.

With two major series competing together, the entry for Sebring this year is so large, the track has had to build new pit stalls to make room. Sixty-four cars have signed up for the race: 33 prototypes and 31 GT cars, a huge field of the fastest sports cars in the world.

North American teams like Dyson, Corvette Racing, Flying Lizard, Rahal Letterman Lanigan; international teams like Audi, Lotus, and Aston Martin are bringing Lolas, Hondas, BMWs, Corvettes, Porsches, and more to Florida to see who is the fastest and the most durable.

Sebring is more than just an iconic auto race. It is also a huge social event, where race fans from around the world come for a week of swapping stories and sharing good times. Tens of thousands of fans from just about everywhere camp at the track while tens of thousands more stay at nearby hotels, not willing to miss one minute of the four days of nonstop racing action leading up to the actual 12 Hours.

As with any healthy community, there is no shortage of entertainment. Music, food, and drink of every variety can be found around the track. A fan could spend the entire four days wandering the tents and pavilions and not see everything.

The thing that draws all these people is the racing. This year the action starts at 8:30 a.m. Wednesday, March 14 with Ferrari Cup cars, with practice, qualifying, and racing half-a-dozen support series. The big cars hit the track on Thursday morning with action lasting until late at night, while Friday offers racing in the support series and qualifying for the 12 Hours.

The race itself starts at 10:30 a.m. Saturday. Before the race is the Grid Walk, where fans can see the cars and drivers up close. The teams line up their cars along the start/finish straight; visitors can walk right up to the cars and crews, peer into the cockpits, photograph the drivers and cars, and see all the details of some of the most advanced automotive machinery on the planet.

This is not an event to miss. At no other North American event will fans get a chance to see so many amazing cars, teams, and drivers in action. There are more teams, cars, and drivers at Sebring this year, than will compete at Le Mans, even.

Tickets for these four days of racing are available through the Sebring Raceway website.