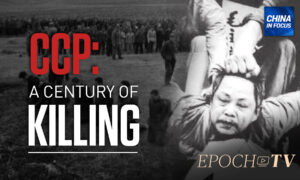 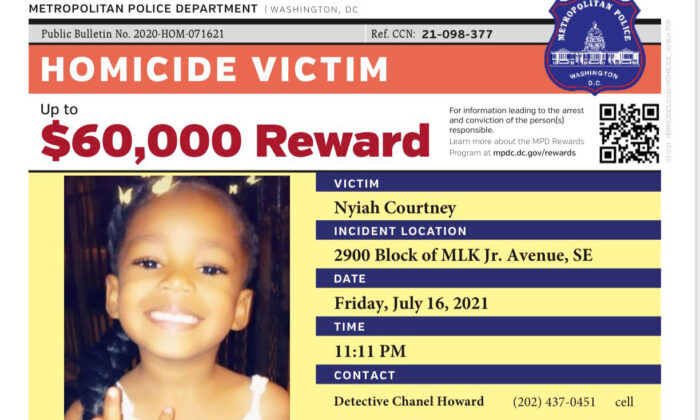 A notice with a $60,000 reward offered by the police after a 6-year-old girl was killed in a shooting in Washington on July 16, 2021. (Metropolitan Police Department)
Crime and Incidents

WASHINGTON—A 6-year-old girl was killed and five other people were wounded when a gunman opened fire Friday night in a Washington, D.C., neighborhood, just feet from where police officers were stationed.

The gunfire erupted shortly after 11 p.m. on Friday in the Congress Heights section of southeast Washington.

Police officers who were nearby responded to the scene about 34 seconds after the first gunshot was heard and rushed the girl to a local hospital in a police car, where she was pronounced dead, Metropolitan Police Department Chief Robert Contee said.

“We will do whatever it takes to close this case in a swift and professional manner,” Contee said at a news conference on Saturday.

Officials believe the gunshots—in what Contee called a “brazen” shooting—came from a passing vehicle. Police released video of the vehicle later Saturday and were offering a reward of up to $60,000 for information that leads to an arrest in the case.

“She was starting the first grade this fall and now that won’t happen and frankly that is unacceptable to me and it should be to every resident,” Contee said of the child.

Community members confronted Mayor Muriel Bowser and other city officials at the news conference, demanding they take immediate action against nearby liquor stores they claim are attracting violence in the area. They described several other recent shootings in the same area.

Bowser and Contee said the community also needs to help police try to drive down violence in the neighborhood.

“The cowards who committed this crime came into this community, without any regard for human life, without regard for Nyiah’s life and opened fire,” Contee said. “That cannot and will not be tolerated. It is time for us to say enough is enough.”