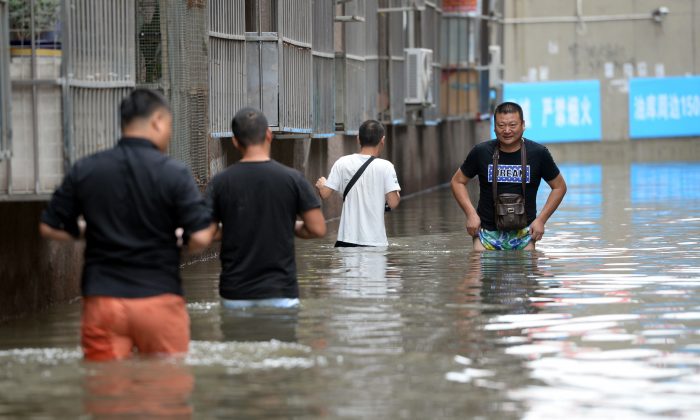 People making their way through a flooded area in Changping District in Beijing. Torrential rain lashing northern China in recent days has left 130 people dead in a province near Beijing. (STR/AFP/Getty Images)
China

A 55-hour-long rainstorm pelted Beijing over July 19 and 20—a continuation of floods that have claimed nearly 600 lives and displaced tens of thousands since heavy rains swept the country.

Citizens of the historically dry inland capital have been “viewing the sea” from their windows and “walking in seawater upon getting off work.” Yet the Forbidden City, Beijing’s major tourist attraction—built 600 years ago in the Ming dynasty—was untouched by the floods.

The Forbidden City remained open for tours during the storm, even as the city issued severe flood warnings, with around 30,000 visiting the historical site on July 20 alone. Experts credited this to the site’s superior drainage system of integrated glazed roof tiles, sloping terrains, and criss-crossed channels that guide excess water into surrounding rivers, according to Beijing News.

The accumulated rainfall on July 19 in some of Beijing’s worst-hit areas reached over 400 mm, with an average of 256 mm in urban districts, according to the Beijing Meteorological Office.

Hundreds of flights were canceled on July 20, subway stations were closed, and train services were suspended, according to China News. Traffic in the capital came to a standstill, paralyzing the city.

Netizens lamented the current urban drainage system while praising the ancient wisdom of the palace’s architecture that allowed it to withstand such storms.

“In such heavy rain, I didn’t even feel much water underfoot when walking in the Forbidden city, yet my shoes got completely drenched as soon as I walked out on the street. I can’t help but admire it,” wrote a netizen after visiting the site.

“The problems in [our] urban construction are glaringly obvious,” remarked another. “Why does the Forbidden City have such a great sewer system, while in our modern city, a heavy rainstorm causes the streets to turn into rivers and oceans?”

Gu Yunchang, assistant head of a policy committee that serves the Chinese Ministry of Housing and Urban-Rural Development, said it indicates a frail urban infrastructure—an issue stemming from hasty urbanization and notions of “focusing above the ground and ignoring the underground.”

“In China today, the personnel involved only seek political achievement, and they never look in the long term,” a web user remarked.

On July 24, Beijing is expecting another rainstorm, which may last 20 hours. Thirty-nine tourist attractions have been closed as a result.

Floods during the first half of 2016 have resulted in 576 people dead or missing. During the last week alone, 130 people were killed in Hebei Province, near Beijing.