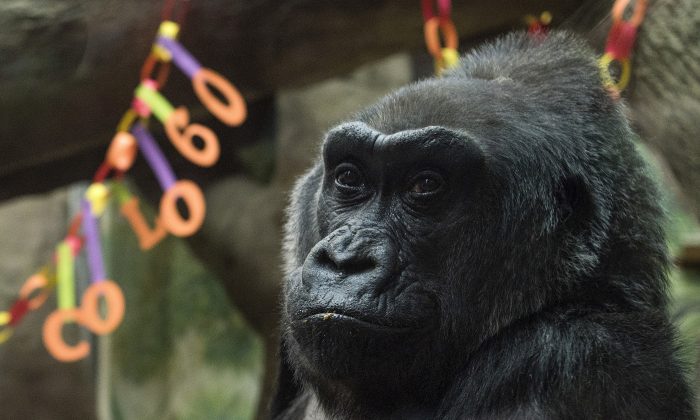 Colo, the world's first gorilla born in a zoo, sits inside her enclosure during her 60th birthday party at the Columbus Zoo and Aquarium in Columbus, Ohio on Dec. 22, 2016. (AP Photo/Ty Wright)
US

COLUMBUS, Ohio—The world’s first gorilla born in a zoo, a female named Colo who became the oldest known living gorilla in the U.S., has died at age 60, the Columbus Zoo and Aquarium said Tuesday.

It said Colo died in her sleep overnight, less than a month after her birthday. She surpassed the usual life expectancy of captive gorillas by two decades.

“Colo touched the hearts of generations of people who came to see her and those that cared for her over her long lifetime,” zoo president Tom Stalf said in a statement. “She was an ambassador for gorillas and inspired people to learn more about the critically endangered species and motivated them to protect gorillas in their native habitat.”

Colo had been on exhibit in view of visitors on Monday, when the zoo offered free admission for Martin Luther King Jr. Day.

The zoo said the gorilla’s body will be cremated and the ashes will be buried at an undisclosed location at the zoo.

Hundreds of people had gathered at the zoo last month to see Colo for her birthday, when the zoo decorated her enclosure with multicolored construction paper chains and cakes of squash and beet and cornbread with mashed potato parsley frosting.

Zoo officials said a post-mortem examination was planned to determine Colo’s cause of death.

They had recently removed a malignant tumor from Colo, but had said she was doing well. The necropsy could help show whether the cancer contributed to her death, but the results aren’t anticipated for several weeks.

Colo is the second zoo gorilla to die in Ohio this month. Cleveland Metroparks Zoo said one of its two male western lowland gorillas, a 32-year-old named Bebac, died Jan. 6.