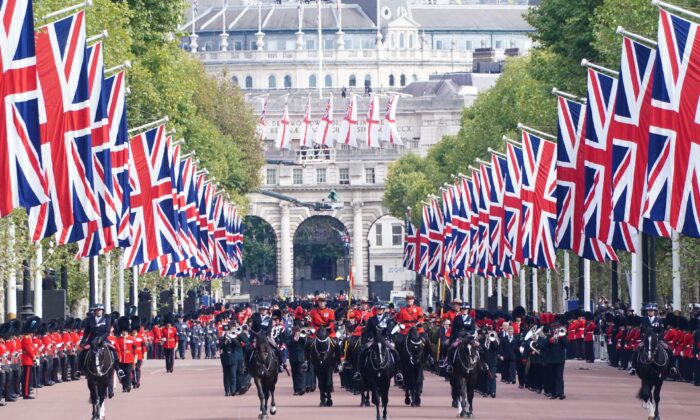 The State Gun Carriage carries the coffin of Queen Elizabeth II, draped in the Royal Standard with the Imperial State Crown and the Sovereign's orb and sceptre, in the Ceremonial Procession following her state funeral at Westminster Abbey, London, on Sept. 19, 2022. (Ian West/PA Media)
Australia

60 Percent of Australians Want to Stay Connected to the Monarchy, Poll Shows

Support for the monarchy in Australia has risen over the last decade, with up to 60 percent of Australians stating that the country should remain as a monarchy, a recent Roy Morgan poll shows.

The result came after the death of Queen Elizabeth II reignited the debate about whether Australia should become a republic with an elected president or stay under the British monarchy and be one of the Commonwealth realms.

However, voters of the left-wing Australian Greens Party are staunch supporters of a Republic, with only a third in favour of the current political system, a four percentage points increase in a decade.

Meanwhile, nearly three-quarters of those voting for Independents and Other parties—who make up an increasingly larger portion of the electorate, endorse the monarchy.

Roy Morgan CEO Michele Levin said in a press release on Tuesday that Labor voters have been “the biggest driver” of the increased support for the monarchy.

“During the past decade, the growing prominence of younger Royals such as the new heir to the throne, Prince William, and his wife Catherine, the Princess of Wales, as well as Prince Harry, and his American-born wife Meghan Markle, appear to have brought the Royals new fans amongst a younger audience.

“Although there has been plenty of drama surrounding Prince Harry and Meghan Markle, that has at times proved frustrating for supporters of the Royal Family, it has not dented the popularity of the Monarchy in Australia as shown by the results of this special Roy Morgan SMS Poll.”

Australian Prime Minister Anthony Albanese, a Republican, who’s on his way back to Australia after attending the Queen’s funeral in Westminster Abbey, said it’s not the right time to draw on republican issues and rejected the idea of a referendum on a republic.

“I don’t agree with a republic, and frankly, I think, what we’re seeing at the moment highlights the stability, the transition, that you get in a monarchy, and it’s hard to imagine how that would happen if we were a republic,” he told 2Gb radio on Sep. 15.

Meanwhile, Greens Leader Adam Bandt was criticised for calling for Australia to become a republic after sending a condolence message to the Royal family.

“Rest In Peace, Queen Elizabeth II. Our thoughts are with her family and all who loved her,” Bandt tweeted on Sep. 9.

“Now Australia must move forward. We need Treaty with First Nations people, and we need to become a Republic.”