60 Percent of Canadians Not Interested in International Travel This Summer: Survey 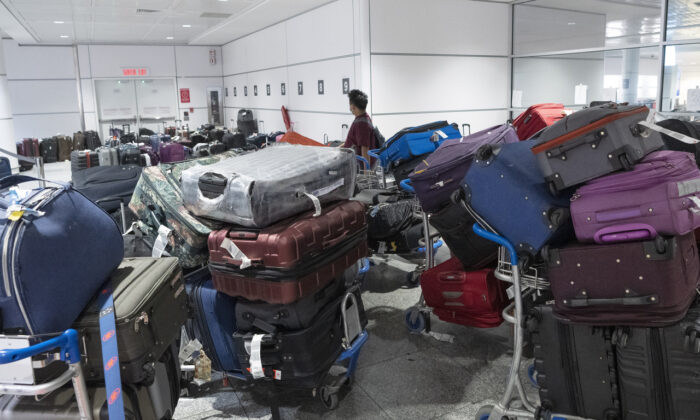 A passenger looks for his luggage among a pile of unclaimed baggage at Pierre Elliott Trudeau airport in Montreal on June 29, 2022. (Ryan Remiorz/The Canadian Press)
By Andrew Chen

As Canadian airlines and international airports struggle with severe flight delays, and with inflation driving up the prices of airline tickets, the majority of Canadians say they are not interested in travelling abroad this summer, a Nanos Research poll shows.

Breaking down by province, the poll found residents in Atlantic provinces are the most likely (70 percent) to say they have no interest in travelling overseas, followed by those in Quebec (64 percent), the Prairies (62 percent,) British Columbia (59 percent), and Ontario (58 percent).

Canadians over 55 are most likely to say they have no interest in travelling internationally this summer (69 percent) compared to younger Canadians, with 58 percent of those aged 35–54 saying so, and 53 percent for those aged 18–34.

Those aged 18 to 34 are more than twice as likely to say they want to travel internationally but have no plans (22 percent) than those over 55 (9 percent).

The survey came as the country’s largest airline, Air Canada, ranked No. 1 in flight delays for several days in a row last week, reported The Canadian Press based on data from the tracking service FlightAware. Air Canada has cut 15 percent of flights this summer, citing “unprecedented and unforeseen strains” on its operations amid a resurgence of international travel following the waning of COVID-19 cases.

Canadians’ enthusiasm for international travel will likely be further dampened as soaring fuel prices are expected to drive up flight prices, according to Willie Walsh, director-general of the International Air Transport Association (IATA).

“Flights are getting more expensive because of the high price of oil and it has been clear to everybody that will be reflected in higher ticket prices,” Walsh told BBC’s “Sunday Morning” on July 10.

“Flying will be more expensive for consumers, without [a] doubt.”

The Nanos poll also asked Canadians how concerned they are about the government bringing back certain public health restrictions in the scenario of a COVID-19 resurgence this fall.

The poll, commissioned by CTV News, was conducted between June 30 and July 4, surveying a total of 1,004 adult Canadians online or via telephone. It has a margin of error of +/- 3.1 percentage points, 19 times out of 20.

Isaac Teo and Katabella Roberts contributed to this article.