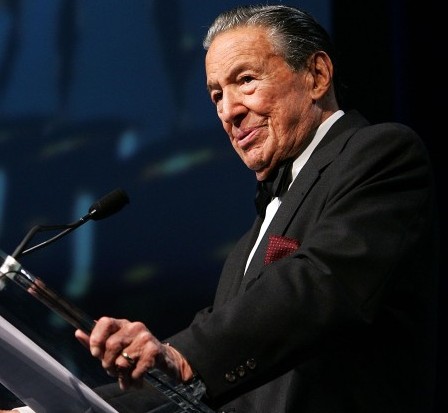 CBS confirmed Sunday that the legendary Mike Wallace, best known to the public as the face of the news magazine 60 Minutes for 40 years, died at 8:00 p.m., Saturday, April 7, at age 93. Wallace passed peacefully and surrounded by his family members at Waveny Care Center, an assisted-living facility in New Canaan, Conn., where he had spent the last few years due to a history of heart illness, having had triple-bypass surgery in 2008.

“It is with tremendous sadness that we mark the passing of Mike Wallace,” announced CBS president and CEO Leslie Moonves. “His extraordinary contribution as a broadcaster is immeasurable and he has been a force within the television industry throughout its existence. His loss will be felt by all of us at CBS.”

Wallace was one of the original correspondents for 60 Minutes when the show first debuted in 1968, and remained with the program longer than any of its other journalists, including other icons such as Dan Rather, Diane Sawyer, Morley Safer, Ed Bradley, and Harry Reasoner.

He retired as a full-time correspondent for the show in 2006, his last major interview being a face-to-face with Roger Clemens about the athlete’s alleged steroid use, although he would appear occasionally on the program until 2008.

Known especially for his aggressive interviewing style and tough questions, Wallace once described himself as “nosy and insistent.” Those within the journalism business often joke that the four words “Mike Wallace is here” inspired fear in the subjects of his investigative reports.

“Wallace didn’t just interview people, he interrogated them,” wrote The Associated Press’s David Bauder following the announcement of Wallace’s death. “He cross-examined them. Sometimes he eviscerated them pitilessly. His weapons were many: thorough research, a cocked eyebrow, a skeptical ‘Come on,’ and a question so direct it took your breath away.”

The most illustrative example is perhaps Wallace’s interview with Ayatollah Khomeini in the aftermath of the 1979 Iranian Revolution.

“Imam,” Wallace had asked, “President Sadat of Egypt says what you are doing is, quote, ‘a disgrace to Islam.’ And he calls you—imam, forgive me, his words, not mine—’a lunatic.'”

His delivery was so direct and matter-of-fact that the Khomeini’s translator was hesitant to translate the question. Khomeini subsequently called for the overthrow of Sadat after hearing the question in Farsi.

Born Myron Leon Wallace in Brookline, Mass., in 1918 to Russian-Jewish immigrant parents who had changed their surname from “Wallik” to “Wallace,” the future journalist and ubiquitous TV personality attended the University of Michigan, originally intending to follow his parents’ wishes for him to be a lawyer or a doctor.

Instead, Wallace got hooked on radio. Wallace’s initial gigs as a broadcaster included being the newscaster for WOOD Radio in Grand Rapids, Mich., and later an announcer for WXYZ Radio in Detroit.

In an era when the line between news and entertainment was much less defined than it is today, Wallace did both. After serving several years in the U.S. Navy in the Pacific Theater during World War II, he resumed his broadcasting career and hosted such radio shows as The Green Hornet, in addition to several game shows. In the 50s, he also hosted two late-night interview shows: Night Beat, which was broadcast in New York from 1955–1957, and ABC’s The Mike Wallace Interview from 1957–1858.

It was during this period, when he interviewed such characters as labor leader Mike Quill and Jewish mafiosa Mickey Cohen, that he developed his irreverent and abrasive interview style that eventually followed him to CBS and 60 Minutes.

Unbeknownst to the public and many of his associates, Wallace also suffered from depression, for which he was treated three times over the years, and admitted in an interview with his colleague and friend Morley Safer that he had attempted to commit suicide in 1986 through a sleeping pill overdose.

Through it all, however, Wallace continued to ask his tough questions and put his interviewees on the spot. In the 1990s, he became a leading critic of corporate censorship of the media after CBS interfered with a 60 Minutes segment with tobacco industry whistleblower Jeffrey S. Wigand. The episode was later dramatized in the film The Insider, starring actor Christopher Plummer as Wallace and Russell Crowe as Wigand.

CBS has announced that 60 Minutes will dedicate a special broadcast to Wallace next Sunday, April 15. Wallace is survived by his fourth wife and a number of children, stepchildren, grandchildren, and great-grandchildren. Notably, youngest son is journalist Chris Wallace, who is currently host of Fox News Sunday.