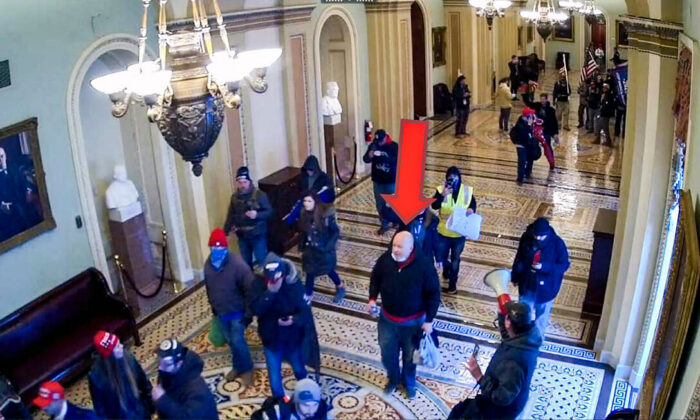 James Leslie Little walks through the U.S. Capitol on Jan. 6, 2021. (U.S. Department of Justice/Screenshot via The Epoch Times)
US News

60 Days’ Jail, 3 Years’ Probation for North Carolina Man Who Did Fist Bumps, Took Selfies at the US Capitol

A North Carolina man who may be on the autism spectrum was sentenced to 60 days in jail and three years’ probation Monday for his walk through the U.S. Capitol on Jan. 6, 2021, and for behavior that included fist-bumping other protesters and taking selfies in the Senate Gallery.

U.S. District Judge Royce C. Lamberth doubled the jail time recommended by federal prosecutors for James Leslie Little, 51, of Claremont, North Carolina. Lamberth stressed that he wanted to ensure Little was under court supervision during the next presidential election cycle.

“I believe some term of imprisonment is essential in these cases now, to reflect the seriousness of the offense, promote respect for the law and to provide just punishment for the offense,” Judge Lamberth told Little during a video hearing in Washington D.C.

Federal public defender Peter S. Adolf of Charlotte, N.C. said Lamberth’s sentence was the first time a judge imposed jail and probation on a single count, something Adolf had argued is not allowed under federal law. “We plan to appeal,” Adolf said.

Adolf spent an hour painting a picture of Little as emotionally fragile, someone who meets the standard for autism or Asperger’s syndrome. He said Little suffers from attention deficit hyperactivity disorder (ADHD) and major depression, lives with his elderly mother, and serves as her caretaker.

When asked to describe who he is closest to, Little said it was his mother and Lady, his Jack Russell terrier, his attorney said.

“There is no reason to put him in jail at this point,” Adolf said. “The reality of Les Little is the only risk that he presents anybody in the future is the risk that he would yell at the TV.”

As part of a deal with prosecutors, Little pleaded guilty to one count of parading, demonstrating, or picketing in a Capitol building, a petty misdemeanor.

Prosecutors said Little “penetrated the Capitol all the way to the Senate Gallery, where he took photographs of himself and sent the photographs to trusted friends.”

‘We Just Took the Capital’

Little also “fist bumped other rioters in celebration of their breach of the Capitol,” prosecutors wrote in a 27-page sentencing memorandum. He sent out text messages that said, “We just took the Capital!” (sic) and “We are stopping treason. Stealing elections is treason.”

Little uploaded a video to YouTube on Nov. 30, 2020, that warned Democrats of civil war if the U.S. Supreme Court did not support President Donald Trump. Conservative law enforcement officers, military members, and conservative Trump supporters “owned lots of guns and God forbid we’d ever have to use it on you,” he wrote.

When FBI agents first visited Little in North Carolina, he told them he wanted to speak to a lawyer. Then he said he would pray about it for a few minutes. When they returned, he invited them in and gave a statement.

“If the cops had stopped us at the door, I wouldn’t have went in,” he said, according to an audio played at Monday’s hearing. “Here’s another reason I think it was a trap: the cops were standing on either side of an open door and we walked right past them, same way going out. I couldn’t believe they weren’t stopping us.”

Little said he followed the crowds around the Capitol. “I don’t even know where I’m going and had no ulterior motives,” he said. “Honest to God, Jesus as my witness, all I did was walk around in there and take pictures.”

Prosecutors said an aggravating factor in the case was that Little went into the Senate Gallery, which is considered a sensitive area.

‘I Don’t Need to Be Going Off to Jail’

Little told the FBI agents that he was worried about being arrested and sent to jail.

“You know I’ve been really praying about this stuff, because I need to be taking care of my mother, you know. I don’t need to be going off to jail for walking around the Capitol taking pictures. You can look at my record. I’m not a violent person, never have been.”

Prosecutor Michael G. James said Adolf offered no evidence that Little was autistic. Adolf said he did not feel he needed to have the government pay for $10,000 in testing costs for a diagnosis.

“Mr. Little is not a child,” James said. The pre-sentence report said Little is “emotionally stable because of the treatment he is receiving currently.”

“He’s not someone who is so blindly led that he didn’t know what was going on,” James said.

Adolf said unlike other Jan. 6 defendants, Little did not use social media to whip up others into action. In fact, Little tended to get “slapped down” when he shared what was going on in Washington. His plea on Facebook for people to write character references to Judge Lamberth for him didn’t yield any offers.

“I impulsively put my life, freedom and neck on the line at a protest to try to save our constitutional Republic, freedom, rule of law, and capitalism, and no one wants to even write a letter for me?” Little posted on Facebook.

A relative who got a text from Little on Jan. 6 said action at the Capitol was “treason,” and if he didn’t condemn it, he should “never bother speaking to me again!” Court records show the unnamed relative reported Little to the FBI.

When Adolf mentioned that Little walked through open doors and did not know what was happening in the Capitol, Judge Lamberth interrupted him.

“I can’t agree with that,” the judge said. “He knew exactly what was going on. He saw, from the government’s description of that evidence, he saw that people were fighting the police before he ever walked in.

“So I don’t think you can mischaracterize it that way,” Lamberth said. “He walked through open doors. They were open because the police had been overwhelmed. So don’t misstate things there.”

When Adolf began describing what the judge would hear on the FBI interview audio, Judge Lamberth stopped him again.

Little told the agents he generally does not trust the FBI because of the Russia collusion hoax. He also expressed worry about vengeful prosecution of Jan. 6 defendants.

“I’m really concerned about political prosecutions, too. Basically all I did is trespass, if you consider it trespassing when you were pretty much let in by the police,” he said on the tape.

“The Democrats are out for blood,” Little said. “I fear that they will come after us and they can charge us with anything: domestic terrorism, sedition, whatever, just ‘cause they don’t like Trumpers, just because we were in there.”

Lamberth said one of the conditions of probation will be that Little not be allowed to use the internet, social media, or phone-to-phone texting without permission from a parole agent.

Lamberth said he sentenced one defendant in a similar case to probation.

“The very next day, the defendant in that sentence contradicted statements she had made in the sentencing on national television and caused me really to reflect on whether or not I was acting in a fashion that was reflecting the seriousness and whether my sentence was reflecting the seriousness of the offense of those in this position,” Lamberth said.