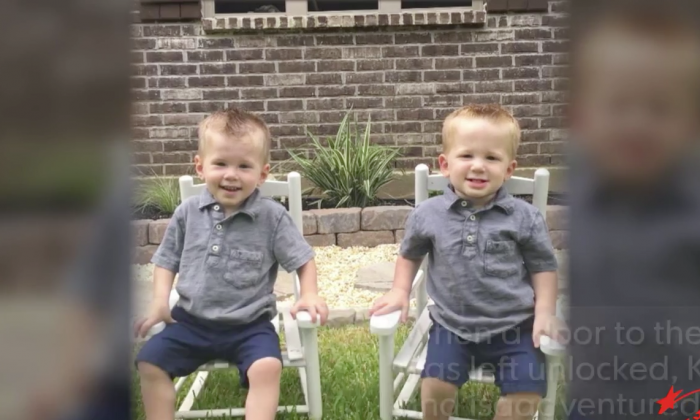 A family in Calhoun, Louisiana, was blessed with a miracle on Sunday, when their 2-year-old twins were rescued from drowning by the twins’ 6-year-old cousin.

Branson Lee, 6, was visiting his aunt and uncle, Jeannie and Steven Kelley, at their home on Aug. 20 when he found his cousins floating face down in the pool.

The Kelley family had invited relatives over for a pool party, and had left the door to the pool unlocked.

Jeannie and her sister, Courtney Lee, Branson’s mother, were talking in the house a few minutes before the Lees were going to leave, reported The News-Star. They thought the boys were watching a children’s program on Netflix.

The mothers told The News-Star they only took their eyes away for a few minutes.

The boys, Kaden and Isaac Kelley, ended up wandering outside to the pool.

“My nephew happened to be walking outside because his little brother, who is the same age as my boys, was wandering outside too,” Jeannie told The News-Star.

“He saw his brother and grabbed him, and that is when he saw my babies.”

Jeannie estimates that her boys would have been outside for no more than three to five minutes.

When Branson saw his cousins motionless in the pool, he launched into action.

“He said he just dove in,” Courtney told The News-Star. “All he knew is he had to try to save them … It was a miraculous thing to know that at 6 years old, he didn’t just scream and run away. He didn’t just ignore it or stand there in shock. He just immediately acted and allowed God to do the rest.”

Branson managed to pull the twins out of the water, and then started giving them CPR, while at the same time yelling for help. According to The News-Star, Branson saw his mother give his brother CPR two years ago, and remembered what to do.

The twin’s father, Steven, took over CPR while emergency services were called.

Steven was giving chest compressions for a full half minute before Kaden began showing signs of life. After another thirty seconds, Issac also started to breathe.

Both boys were airlifted to Shreveport, a city about 80 miles to the west, but on the way to the hospital, Kaden had already begun to speak in complete sentences with Jeannie.

“The next morning, they were just like nothing had ever happened,” Jeannie told The News-Star. “They were wanting to play, and they pulled their IVs out. They took their oxygen off themselves.”

Jeannie said that the survival and the complete recovery of her two boys was a “total miracle.”

Doctors told the family that the twins’ recovery was very rare, and that in the best case scenario, they would be preparing the family for brain death.