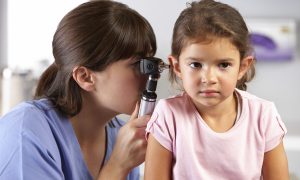 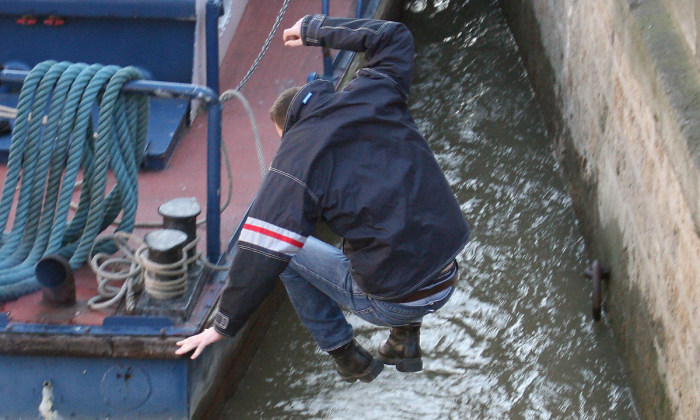 A 6-year-old girl fell into a small river and was saved by a passing-by delivery boy. The incident occurred in a small village in Zhejiang Province, China and it was caught on video and posted to Weibo, China’s version of Twitter, on March 11.

In the video, a young girl in an orange shirt and red-plaid skirt steps down a stone staircase towards the water. She is holding a pole, and appears to be using it to stabilize herself as she lowers one foot towards the water.

She then loses her balance, and topples back-first into the water. She is immediately submerged, with only the wooden pole above water for a moment.

Her head pops out, and she can be seen flailing in the water, unable to swim.

Just as she is splashing away from the shore, a deliver boy rides up on a moped. The young man, named He Linfeng, quickly parks the bike, takes his cellphone out of his pocket, and runs down the stairs as soon as he sees her.

Another girl has been squatting down on the road side. Only after He runs by her, does she stand up and stare at the other girl in the water.

He jumps into the water, and quickly grabs the girl. She holds onto him, hugging him around his neck, while He swims with her back to the stone staircase.

The girl is safely placed back on the stone steps, and He swims back out for a moment. The other girl on the road seems excited, leaning over the side and jumping as she sees the other girl on dry land.

“When I drove into the village, I saw there was movement in the water, there was a kid in the water,” He said in the video. “I thought she was going to sink, so I stopped my moped, tossed my phone on the ground. I didn’t think much and just jumped down [in the water].”

Helping Others in China

The Chinese Communist Party’s ideologies have warped traditional culture and moral values in China. Although those values have been under attack for nearly 70 years, goodness and tradition still survive in some peoples’ hearts.

Recently, a woman spent an extra hour of her time to provide light for a mother and child on a dark country road. A driver in a car, named Gao Yuan, drove behind the mother. The mother was riding home at night and also carrying her daughter on the bike, and the road had no street lamps.

Many Chinese netizens responded positively to the act of kindness.

A former university researcher, named Wei Wenfeng, gave up his job to make a laboratory that tested products for toxic chemicals. The intent of this lab was to allow parents to freely test products purchased for their child. Some well-to-do Chinese parents funded the lab.

Wei also set up free-to-use systems, like loaning expensive formaldehyde testing devices to parents, at no charge. Sharing like this in China is almost unheard of in modern times.